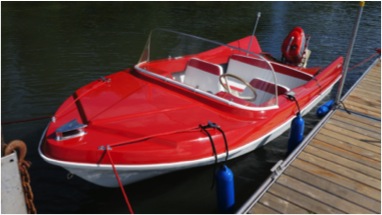 Her preservation complete, this superb example of a Fiberglassic, is now for sale. Please contact us for pricing and terms. Come by the shop and see her in person!

This 1959 Cutter Jet de Ville resting on her original, well-rusted trailer. But her original Mercury Mark 55 Thunderbolt Four engine and all of her original Vollrath stainless steel hardware, her steering wheel and her speedo were intact when I found her in the woods off a dirt road in Milton in November 2011.

Most unusual is her left-hand drive, which indicates that she was originally sold for racing on the left-turn-only oval circuit.

Watch her leaving the shop, being launched and roaring across Lake Champlain.

UPDATE: Little Chief wins Best of Show in her class at the 2012 Vermont Antique and Classic Boat Show!

Little Chief is now for sale and seeking a new home. Contact us for pricing and terms. Come by the shop to see her up close and personal

She has not seen water for well over ten years. With her ground up preservation complete, we launched her into the waters of Lake Champlain in Vermont on August 4, 2012, and ROAR she did!

This boat now has a new 3M 5200 bottom. Any rib deamed even slightly compromised was replaced. Every framing, planking and deck fastener was released and replaced with silicon bronze. All wood surfaces were treated with Smith’s Clear Penetrating Epoxy Sealer, and all interior surfaces were painted with multiple coats of Sandusky Mahogany Bilge Paint. Every piece of hardware, all of which is original, was transformed in jewelry by D&S Custom Plating in Holyoke, MA. The original 95 HP Chris Craft Model K engine was completely disassembled and then rebuilt by Restoration and Performance Motorcars of Vermont.

Little Chief has now left the preservation shop and is in the Snake Mountain Boatworks sale inventory. We will be happy to explore with you how she can be yours.

Here is Little Chief on her new Sea Lion trailer and ready to leave the shop:

Watch Little Chief slide back into the water for the first time in over a decade:

What a fantastic experience! Having completed her complete preservation that included entirely new transom, engine mounts, interior flooring, seats and instruments; as well as rebuilding her 318 Super Bee II Chrysler V8, and removing and rebuilding gelcoat on the entire length of the hull below the gunwales.

Watch as she emerges from the shop, preservation complete:

Watch her roaring on Lake Dunmore in Salisbury, VT with owner, Angelo Lynn, at the helm:

Words can hardly be found to describe what it feels like doing “only” 40 MPH in a boat having about 14 inches of freeboard! (She has a much higher top end, but the engine needs some run-in hours on it first.)

Yes, Snake Mountain Boatworks mission is saving old wooden boats. However, the transition from wood to fiberglass that pleasure boating experienced beginning in the late 1950s produced a few stunning examples. Among the most stunning was the Cutter Jet de Ville, built in 1959, and sporting big fins borrowed from the auto industry.

These early Cutters were powered by Mercury outboards. The Jet de Ville was no exception, and when found in the woods of northern Vermont, this boat still had her original Mark 55 Thunderbolt Four hanging off her transom.

She was also resting on on a very rusty, flat-tired, but original trailer. A fellow working with a large excavator nearby offered to lift boat and trailer onto my transport trailer. My crew just stared at me as I drove up to the shop, so I had to explain.

Every piece of her original Volwrath stainles steel hardware was intact, as were her original steering wheel and related lines. Yes, the upholstery was completely trashed, but we had enough for patterns.

And, she is left-hand driven, which means she was sold and used in oval circuit racing.

Her preservation complete, she is again sporting her original colors, Merc sunset orange over white. She now rests on the same trailer, which we completely disassembled, sand blasted and repainted. The trailer’s wheels sport proper, NOS 1958 baby moon hubcaps.

Watch as Val Desesare fires up and tunes the Mark 55 that he rebuilt:

She has moved from shop to showroom and joined our inventory of preserved boats for sale.

There is a new old Lyman sleeper in Vermont! And she’s being prepped for Lake Champlain at Snake Mountain Boatworks.

This barn queen has been “resting” for “several” years. Here RJ and I are using the infrared “Silent Stripper,” which allows us to remove paint down to the wood in one pass without exceeding 600 F. As such, we are protected from any lead vaporization. In fact, as you will see on the floor beneath the boat, the scrapings are dry and in virtual powder form when they release from the wood.

Follow us as we bring Eleanora back to life… 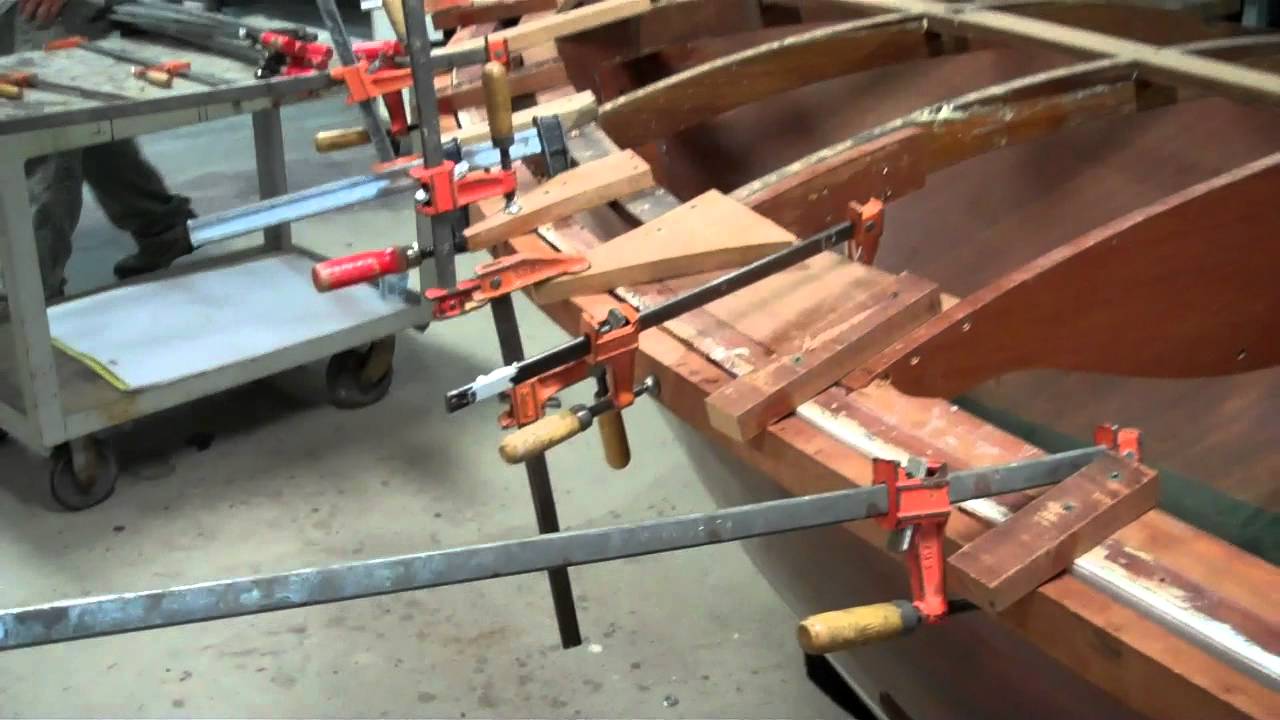 The forward section of the port rubrail just could not be saved. Here you will view how the hull itself can serve as the pattern for steam bending a replacement. Once cured, the blank was shaped by hand to fit the ever-changing radius, one that is longer at the top than at the bottom of the rub rail.

Watch the crew battle against gravity as we attempt to flip this heavy, very flat rocket. 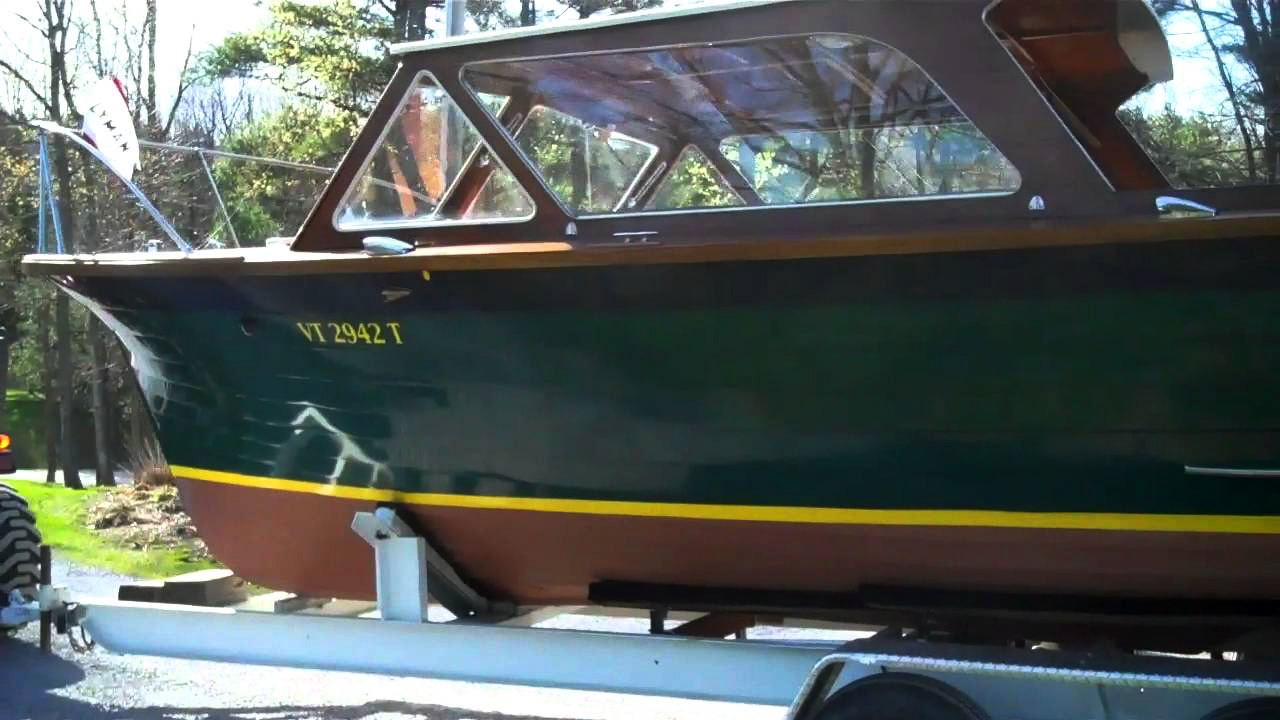 The Drake is a 26′ Lyman Cruisette – Hull # RC1086. The Snake Mountain Boatworks crew spent the winter preserving her to the condition she was in when she left the Sandusky, Ohio factory in 1967. Our biggest challenge was completely rebuilding her deck and gunwale framing, followed by milling out and installing seamed, plank teak decks that matched the specs of her original build sheet. In this video, the Drake is emerging from her winter quarters, gleaming and eager to once again grace the waters of Lake Champlain. 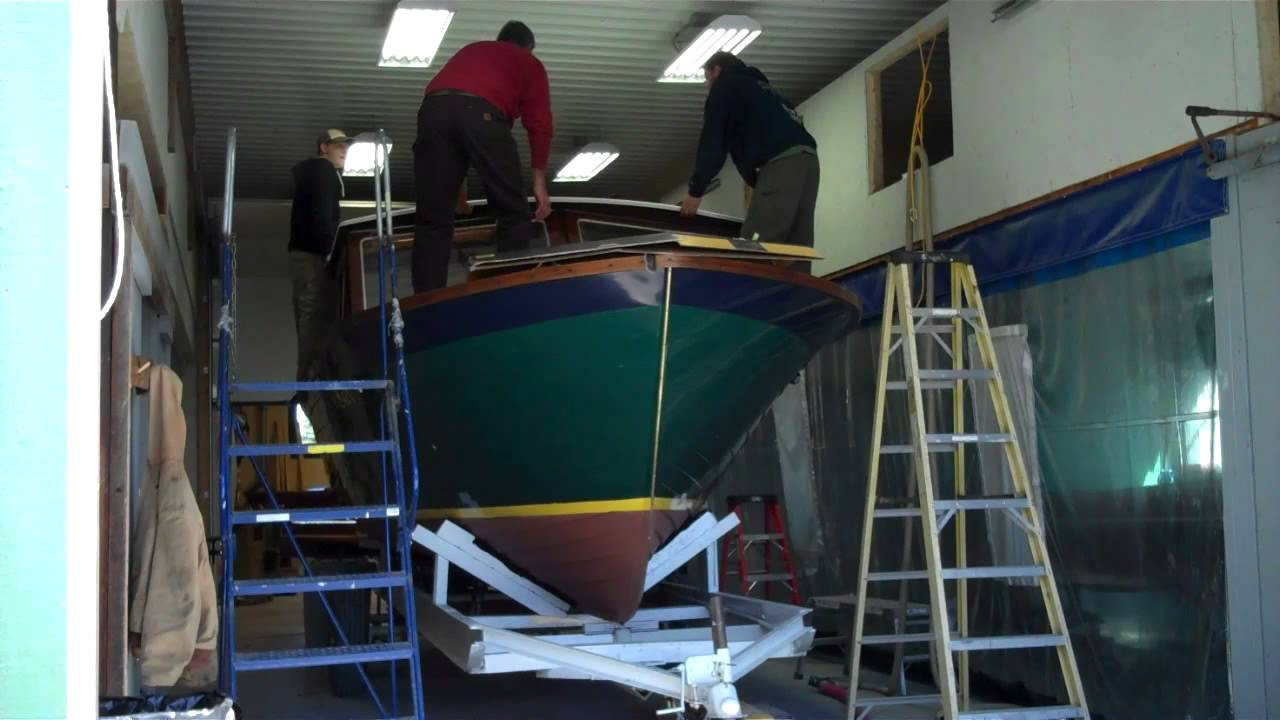 At over eight by nine feet, and recovered in glistening new Stamoid, reinstalling the Drake’s roof over eight feet onto the cabin, without marring the new teak decks nerve-wracking. But it is now in place and the Drake’s complete preservation is nearing completion.