We’ve enjoyed preserving Penn Yan Captivators, and especially the Aristocrats, over the years. The Striptite can be challenging.

Penn Yan was unusual in so many ways, not the last of which is the myriad of canoe and outboard and inboard power boats, the latter mostly Striptite, it offered.

Equally intriguing is that a Penn Yan’s “hull number” is actually a model code combined with her hull number. Aristocrat, for example is stamped TFK54389. The code TFK identifies her as a Captivator Aristocrat built in 1954. Her hull number is 54389. Here is a fantastic resource for identifying almost any Penn Yan canoe or boat built in 1926 or later by its letter code and hull number.

From the introduction:
Serial Number Format – Two or three letters followed by 3 or 5 digits is typical, there are variations. In some cases the first two letters indicate the model, in other cases the first letter indicates model and the second indicates length. The third letter, if present, indicates trim (S=Spruce, M=Mahogany). See the Penn Yan identification table below for letter codes.
Dating – Sometimes (apparently only in the second half of any given decade) the first two digits of the serial number are the year built, and the remainder the presumed order of construction. In the case of Owasco, Rainbow Guide and Kingfisher model canoes, three letters in the serial number indicates 1947 or earlier, 2 letters is 1948-1960. An exception is that some pre-1933 16′ Rainbows and 16′ Owascos may be marked RC and OC, respectively.
Screws – Presence of Reed & Prince screws are usually indicative of Penn Yan canoes.

In Captivator’s case, searching the “Captivator Series” section informs us as follows:
Our preservation project will focus on rendering the hull sound and we conducted as detailed an examination as is possible until at least some disassembly is behind us. Here is what we found and recommend (I fear the formatting below may be lost when pasted into the YouTube “Description” box and apologize therefore.)

Yes, we will keep you in the loop! 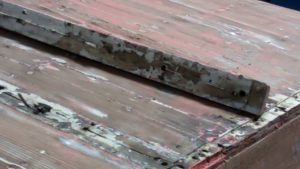 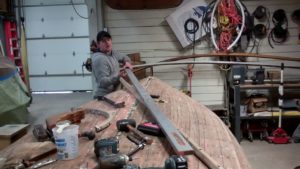 1954 Penn Yan Captivator Aristocrat: How to Release the Transom 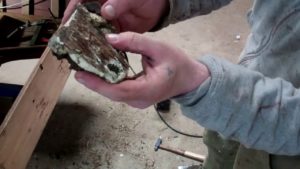 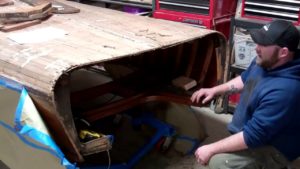 1954 Penn Yan Captivator Aristocrat: How to Fabricate a new Transom 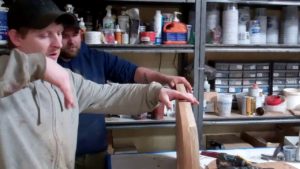 1954 Penn Yan Captivator Aristocrat: How to replace the Transom