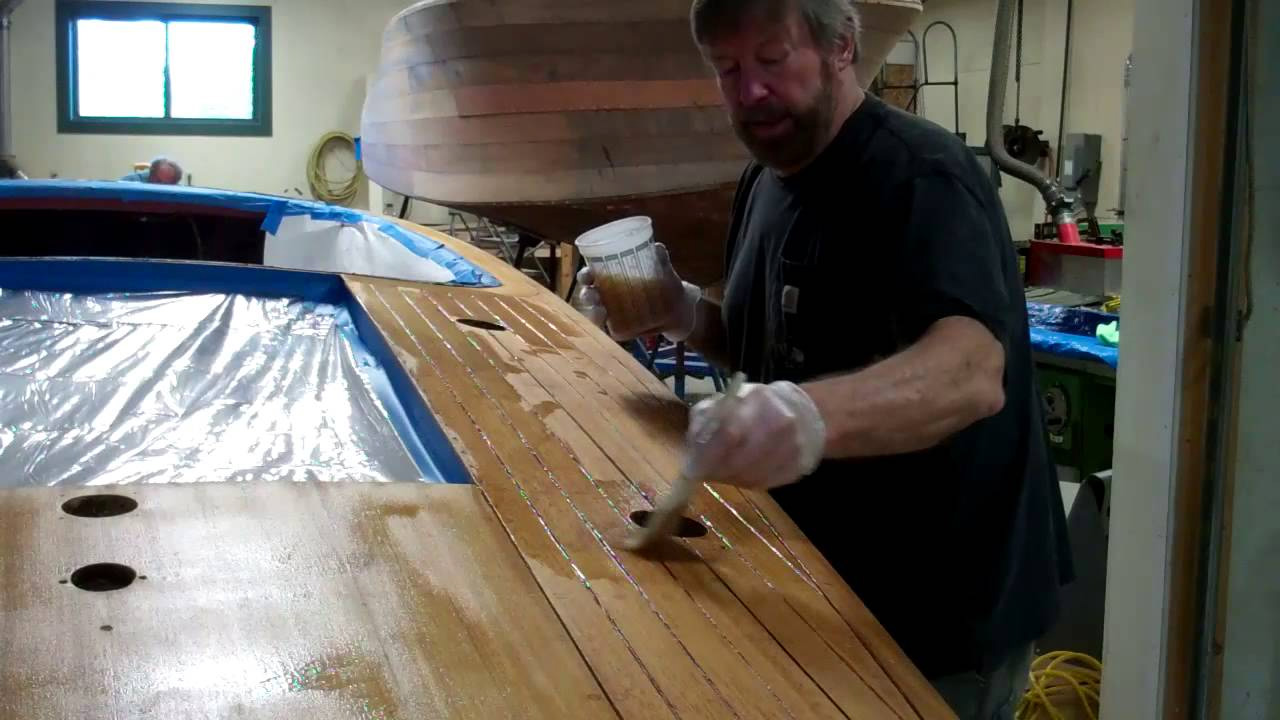 Snake Mountain Boatworks is Michael Claudon, Joe D’Avignon and Anthony Warner. We know our way around, in, under and through wooden boats.

When she left the Chris Craft factory in 1948, the company expected this seemingly beautiful and sound little Chris Craft Utility Deluxe to last 8 to 10 years at most. She was now over 60 years old, and, while her fit and finish were a bit rough here and there, and the hardware was ready for rechroming, she really looked pretty sound.

In fact, having tested the engine and finging that it ran pretty well, after running a hose into her bilge for 10 days to “soak her up,” down to Lake Champlain we went for a test. She did pretty well, and even reached speeds of 40 MPH. But little did we know what lay between us getting back to shore and the water pounding the hull from below. Her bottom planking could not be salvaged. Ninety percent of her ribs were shot. The bottom bow in the transom was mostly dust.

Given her age, she almost surely has gone through several, and maybe as many as six major overhauls. But she was ready again, as is the case for most of the boats that come into the shop. We make every effort to save every stick of original wood that we can, but not at the scrifice of delivering a sound boat back to her owners.

We source our marine hardwoods and plywood from the foremost east coast vendors, and use nothing but FAS Pattern Grade lumber in our restorations.

D&S Custom Metal Restoration, 102 Cabot St, Holyoke, MA, is our go-to shop for metal preservation and chrome plating. Mickey Dupuis and his incredible crew have earned their nationally-recognized reputation for delivering only show quality work. Mickey can be reached at 413-533-7770, or [email protected]

Following are links to examples or our work that support our contention that we uphold only the highest standards of craftsmanship:

Watch playlists of our YouTube videos that chronicle each boat’s preservation.

A lesson in fiberglass blistering “repair.”

Watch the decks being removed from a 1967 26′ Lyman Cruisette

And now watch the deck-removing finale

The 26′ Lyman Cruisette has landed … on dollies.

Watch as the fully-preserved 1957 Century Resorter leaves the shop for delivery to her owner.

Watch as the Drake, a 26′ Lyman Cruisette emerges from a complete hull, deck-framing preservation and installation of exquisite seamed teak plank decks.

As with all other aspects of our work, Don Danenberg guides our frame work, planking and cosmetic work.The 1948 Chris Craft Utility Deluxe shown here was in dire straits upon arrival. We replaced the gripe and knew, 90% of the ribs, and the lower transom bow. And then re- installed a “5200 bottom” that included entirely new planking. Two transom planks and the below-water-line port and starboard planks were steam bent and replaced as well. All surfaces were treated with mutliple coats of Smith’s Penetrating Epoxy Sealer, and all joints and planking were secured with Frearson-head silicon bronze fasteners and 3M 5200, as is the case with every boat we work on. Watch keel rabbeting on a 1956 Century Palomino.

We tried all manner of chemical strippers. In a phrase, what we got for our efforts was a big mess every time. And no matter how careful we were, these harsh chemicls either ate whatever we wore for gloves, or, in the case of one water-based “stripper,” failed to burn our skin but also failed to release anything but tired topside paint.

DeWalt offers a great heat gun, and Sandvik sells expensive but highly effective and super-tough scrapers. We now remove all sorts of finishes without the gooey mess, without burning our skin, and without leaving chemical residues in old mahogany and oak.

Watch us complete the deck striping on a 1957 Century Restorter.

The SMB crew is well-schooled in the art of delivering “miles-deep” brightwork using Epiphanes and Le Tonkinois clear, high-gloss varnishes and hours of elbow grease.

Our bilges receive either Sandusky Bilge Paint or Interlux Bilgekote only. Yes, other brands are available, but none stand the test of time and abuse like Sandusky and Interlux products do.

Interlux is our go-to supplier of bright topside and boot stripe paints, becuase these products set the standard for competitors to equal.

The SMB crew brings decades of combined experience building, repairing and upgrading all manner of engines, drivelines, transmissions. Sorting out electrical and wiring issues, from a single circuit to rebuilding entire harnesses sits squarely within our sweet spot as well.

However, when faced with rebuilding marine engines, we turn exclusively to Robert Henkel, the second generation of his family to own and operate Peter Henkel Inc, aka Chris-craft-parts.com. The firm was founded by his father, Peter Henkel, in 1929. Robert grew up in the business and, following in his father’s footsteps, Robert has earned a reputation as one of North America’s foremost marine engine builders and parts suppliers. He currently operates at 7530 Marsh Rd., Cottrellville, MI 48039, from which he ships parts to and rebuilds engines for customers globally.He can be reached by email at [email protected].