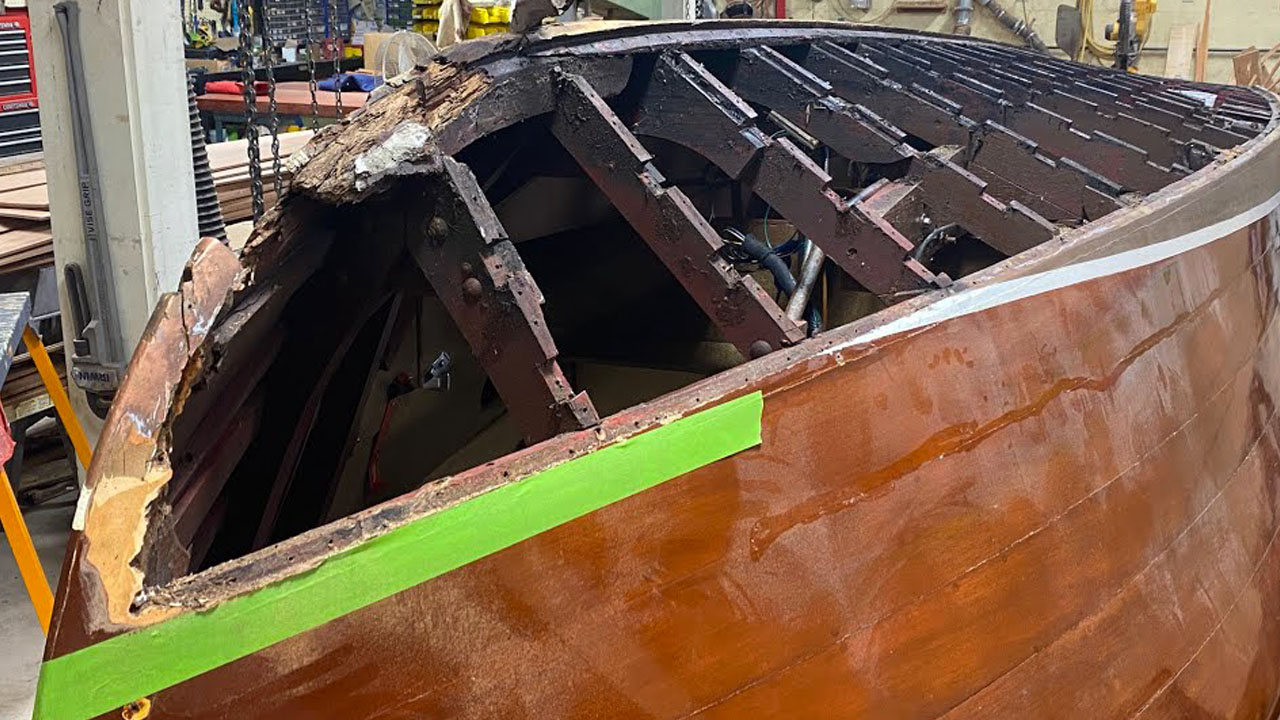 After receiving ten coats of Pettit Flagship Varnish and then being sanded absolutely flat using 500 grit, Winnie will go to Joanie Alden’s lettering shop, Vital Signs and Silk Painting, in Colchester, VT for her transom and registration lettering.

All is good with Winnie, so much so that she might even be home for Thanksgiving.

Would that we can be equally excited for Songbird, who we flipped yesterday and began releasing bottom planks today.

Before us is a truly sad, sad antique runabout, one that is incredibly rare and truly iconic. I apologize for my rude language, but, as the clip chronicles, she has been raped in every way a wooden hull can be assaulted.

Folks! Automotive products have their place and can produce magical results …. On cars and trucks, NOT, NOT, NOT on boats of any sort, wooden, fiberglass, steel, aluminum or even Titanium.

And the worst of the worst other than cheap, Chinese engine parts – automotive fuel pumps, solenoids, oil filters and on and on – is BONDO!

Sure, some hack going the cheap route might get away with a little “repairing rot” using automotive Bondo for a little while.

However, automotive Bondo absorbs and retains moisture. Use it in place of a marine filler or fairing compound like 3M Marine Premium Filler, and all you are “achieving” is sounding the death knell of your wooden boat.

OK, what do I know? I’m not sure, but I have eyes. You have eyes. Pay attention to the destruction that using cantaloupe-sized gobs of Bondo has visited on this poor hull.

The Bondo plus gallons and gallons of leaking oil has created a perfect storm for destroying virtually every piece of structural wood from the waterline down to and including the keel.

The Bondo’s most aggressive destruction has occurred in the stem, gripe and keel where some complete buffoon thought she/he could glob in huge gobs of Bondo in place of wood.

Pay attention! In an earlier clip, I wondered at the line of about 7/16”-diameter circles along the stem that secured the screws driven through the cutwater. Hello?

After shooting the video, where we again wondered about these plugs again, Joe and I went at one of them with an awl. You got it …. Bondo! In fact, vast areas of the stem and what is left of the forward ends of the topside planks – particularly on starboard – are nothing but Bondo that is surrounded by rotting wood.

Can we save her? Yes. Just think of what we call our skeleton project, the 1950 18’ RIV that arrived in pieces, but now is sporting an almost-finished True 5200 bottom.

However, working on the stem requires that all of the topside planks’ forward extremities, at least back to the third or fourth hullside frame must be released. Releasing them means stripping varnish to bare wood.

But we also face the reality that most of the hullside frames’ lower extremities are rotted and floating, which is in part the result of some fool “sistering” the knees with random chunks of hard and soft wood, all of which is now oil-sodden and no longer attached to anything.

My final lament. Folks!!!!!! DO NOT EVER, EVER, EVER, EVER use anything but silicon bronze, Forstner, flathead screws in a wooden hull! This bottom was “fastened” with a random mixture of sheet rock, stainless, common steel, and, yes, a few original brass screws here and there.Thank God Don Danenberg just published what I consider to be the seminal article on repairing below-waterline framing in the November/December issue of Classic Boating, which I have scanned and printed, and insisted that I, Joe and Rick digest completely. Several copies are in the shop, and I’ll like be reaching out to Don as we try to save Songbird. 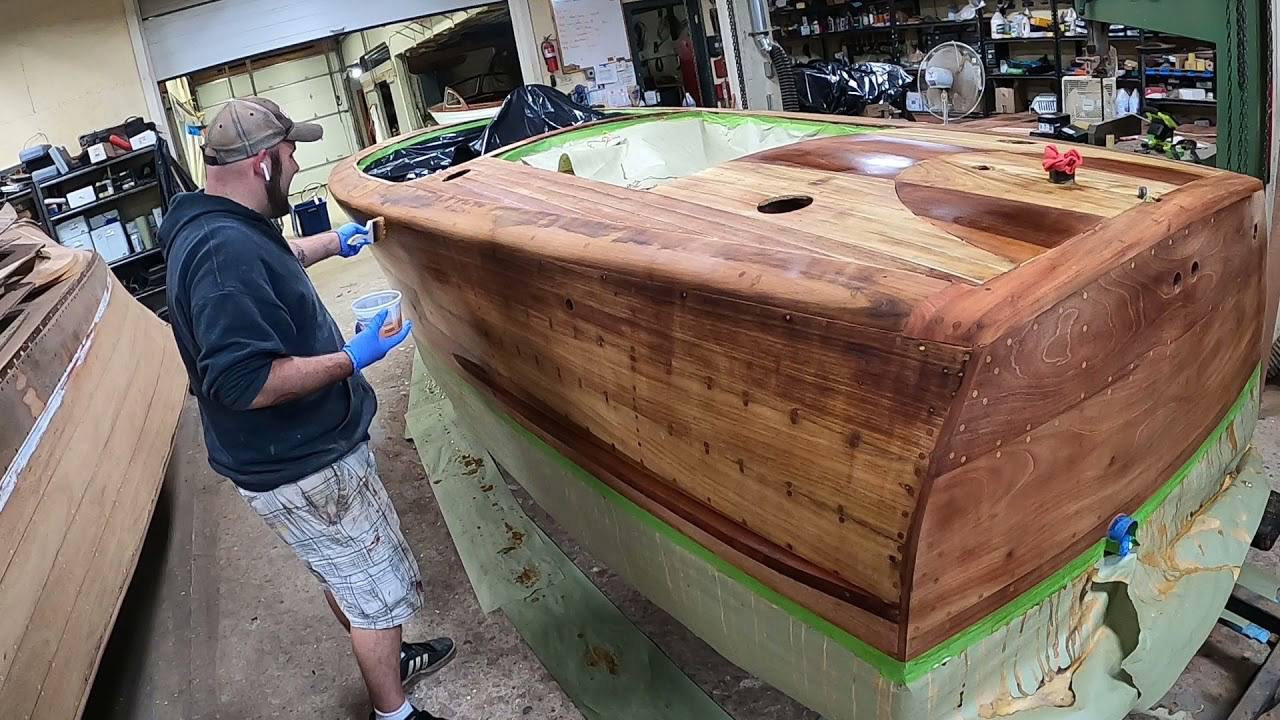 Winnie has been stripped and sanded fair, following Joe’s execution of a few Dutchman repairs and replacing a few loose bungs.

The hull is in excellent condition with nary any loose or broken screws.

Winnie is now enduring some aggressive bleaching using Daley’s A&B Bleach mixed at a ratio of 3B:1A. Joe began applying bleach early this morning and will continue reapplying it throughout the day, with a goal of keeping the wood soaking wet. After sitting overnight, her blonde inner self hull will begin emerging. She will be near snow white by the time her moisture content reaches about twelve percent.

Since now rinsing is required after applying Daly’s, we will next lightly scuff sand the hull using medium Scotch Brite pads. (Do not reach for sandpaper as sanding risks going through what is a very thin layer of bleached wood.)

Once she is scuffed and vacuumed, we will begin what will be a challenging staining process using Lake Oswego Boat Co. J’eld stain.

We will stain and seal (CPES) the blonde sections of the “torpedo” first to protect them from the dark stain we will use on the balance of the decks. The topsides and transom will be stained to match the decks.