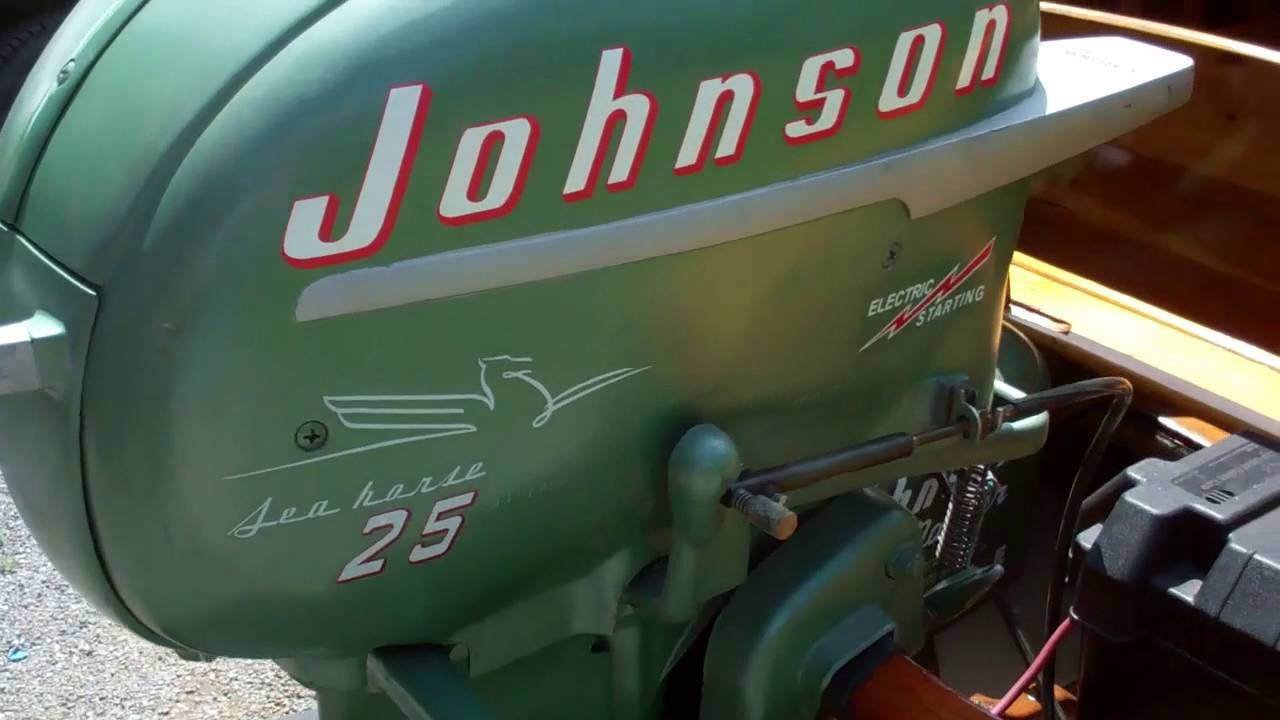 We could not be more pleased with the preservation results as this truly darling 1955 Penn Yan Commander Aristocrat, hull number is ORH 552832, who rides on her brand new, 2016 Load-Rite aluminum trailer, debuts post-preservation and is now available to the person or family who falls in love with her.

She is quite original, even to the point of retaining the original covering plate for the steering column hole in the dash not being used as the helm station. Her Taylor Made windshield is original as is her hardware, all of which is still with the boat.

She is powered by a 1954, Model RDE-16 25 horse Johnson Sea Horse engine. The engine, solenoid box and engine controls retain their original Johnson Sea Horse Green paint, all of which is in exquisite condition. Removing the cowl reveals an equally clean, bright engine that also retains its original Sea Horse green paint. Her ignition plate matches the rest of the ensemble in terms of its originality, color and condition. We serviced her completely, part of which process involved installing a rebuilt starting motor and new electric choke along with the standard plugs, points, etc.

As you will see in her post-preservation debut video, the engine starts, idles and revs up easily, smoothly and strongly.

The boat is interesting in that the center-steer station can be installed in either compartment. We plan to re-position the original Wilcox Crittenden steering wheel and engine controls to the forward compartment.

The Striptite hull and transom, both inside and out, was in superb structural condition when she arrived last fall, but now has been preserved to an eye-popping show-ready condition throughout. We retained the original and unbelievably rich color and varnish on the decks, and similarly for cedar and oak interior, as well as the oak gunwales by sanding all surfaces flat by hand and with great care.

The decks, gunwales and rub rails then received six top coats of Pettit Hi-Build varnish that was carefully sanded with progressively finer grades of paper, until the last pass with 500 grit following the fifth and in preparation for the sixth and final coat. I hope you will agree that, as presented in the photos and video that accompany this offering, she is a stunner who has not been spoiled by over-preservation throughout.

Perhaps the most tedious portion of the preservation process was first scrubbing her interior clean, followed by sanding with 180 and then 220 grit. Three coats of Sikkens Cetol Marine completed the interior preservation.

We stripped the exterior hull to bare wood from gunwales to keel and sealed it with three coats of Clear Penetrating Epoxy Sealer, followed by five coats of Interlux 2000E Two-Part Epoxy Barrier Coat which makes water infiltration impossible. We finished the project by applying six coasts of Epifanes Monourethane above and below the waterline.

Her 2016 Load-Rite trailer is brand new and comes with both a title and Bill of Sale. We will also provide a Bill of Sale for the Commander Aristocrat.

Here is an example of the best of Penn Yan who will be a strong contender to win Best of Class, if not Best of Show in any show she is in. 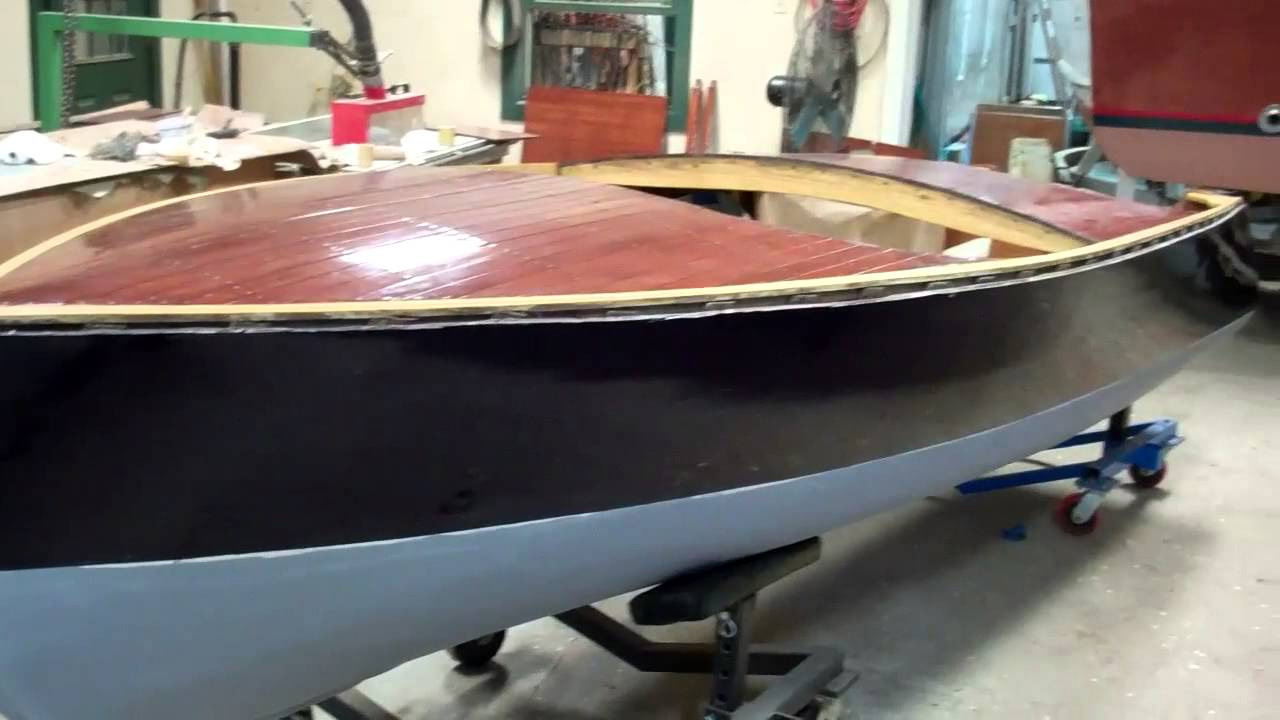 Epifanes asserts that its Monourethane One-Component hard high gloss paint “provides incredibly hard urethane abrasion and chemical resistance with outstanding gloss, durability, color retention and U.V. protection. It can be brushed or rolled with the application ease of an enamel.”

Our experience is absolutely consistent with that claim. We selected dark blue for the topsides and, as is correct for the Commander Aristocrat model, she will be light oyster below her spray rails.

We have continued our practice, one that is urged by Don Danenberg, of applying five coats of Interlux Interprotect 2000E barrier coat below the waterline, but have also applied three coats to the topsides to absolutely inhibit any water infiltration.

As Epifanes Monourethane explicitly forbids direct application over an epoxy primer, which 200E is, we followed the barrier coat application with two coats of Jamestown Distributors’ TotalBoat Topside Primer.

The existing finish on the splash, rub rails and coaming proved to be beyond saving, so we have stripped and bleached, stained and have begun varnishing them.

Happily we will be able to save the original finish on the fore and aft decks. A light sanding with 320 grit will be followed by 6 – 8 coats of Pettit Easy Poxy Hi-Build varnish.

The existing finish on the hull’s interior and bilge will be saved as well. We will clean vigorously with a brass brush, sand all surfaces lightly and then apply several coats of Sikkens Cetol Marine varnish. 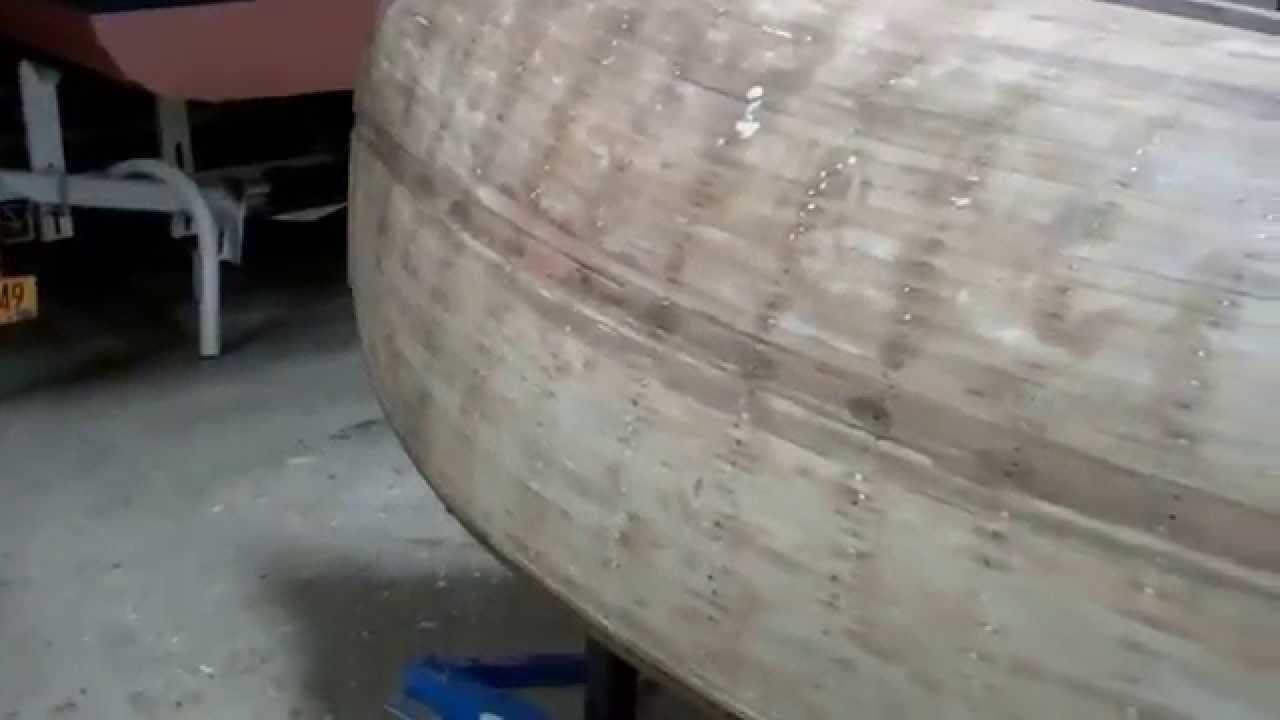 Sweet! We have the Commander Aristocrat’s hull cleaned to bare wood, and “Sweet!” is about what we discovered beneath all the paint.

Overall the Striptite planking is in great shape. There are no soft or black spots and no failed fasteners. Yes, we must set some of the copper nails, but are not faced with any re-planking.

One surprise, given the hull number, ORH 552832, we understood that her bottom planking and transom should be mahogany, which they are, but expected to also find mahogany topside planking, but it is white cedar for sure.

Finishing the topsides bright, as we understand this model was when it left the Penn Yan factory, means cleaning, resetting and then filling the fastener countersinks with appropriately stained putty. My guess is that we will be reaching for the TotalBoat Thixo Wood, which we can color using the same stain we will use on the topsides and transom.

As I closed in the last clip on this boat, there is nothing glamorous about stripping a hull except being done. Yeah!!!! We are done. 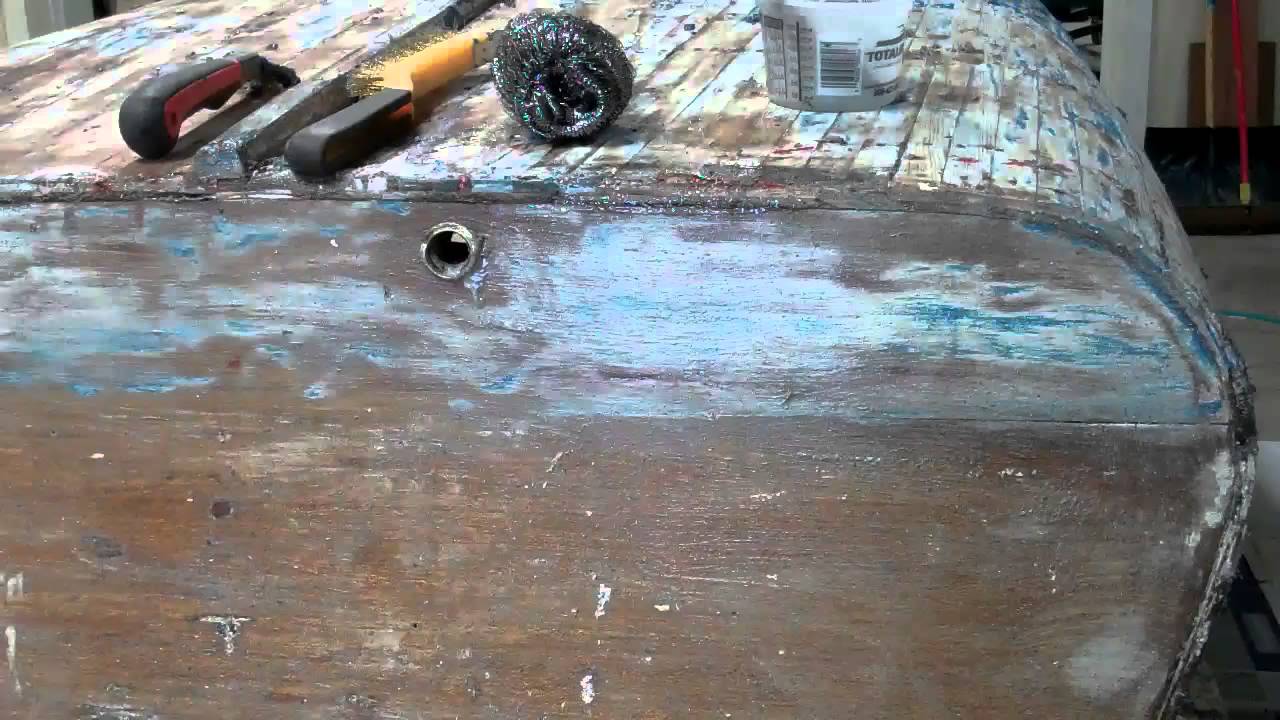 The 1955 Penn Yan Commander Aristocrat left the factory with her transom, topsides, decks and interior finished bright. She was painted ivory below the spray rails.

By noon today RJ and I released my Commander’s hardware, as well as the seating, bracing in the bilge, steering, coaming boards, rub rails and spray rails.

The good news is that we found neither soft wood nor rot anywhere. Even the undersides of the spray rails are solid. The finish, however, its beautiful patina notwithstanding, will be difficult to save, but we will try to save it before we strip it away.

The painted topsides, transom and bottom are very much another matter. The paint, especially that hideous purplish blue bottom, must go. As always, I was suspicious that varnish had been replaced by paint as part of an effort to hide condition issues in the planking.

Happily, as RJ noted once I had it about 95% clean, “Looks like we can work with that transom.” Yes we can. The planking, which is clearly original, is in excellent shape. The same holds true for the bottom now that we have it about three-quarters stripped.

Patience, combined with not brushing stripper out like it is paint are the keys to efficient paint stripping. Trying to stretch the stripper is pure folly in my world.

Patience means, “Let the stripper work.” I apply it liberally, almost as though I am frosting a cake. Indeed, I pour it from the can and spread it with as few brush stroked as I can. Then I leave it alone for at least half an hour, but even as long as an hour.

Now it’s time to scrape? No. Apply more stripper on top of what is already there, and go away again.

Our go-to stripper, Jamestown Distributor’s Circa 1850 Heavy-Bodied Paint and Varnish Remover, has softened the paint down to the wood by now. It’s time to begin scraping, in our case, with a BAHCO scraper, rolling the material off the surface.

To be sure, nothing about stripping paint or varnish is glamorous, except being done.