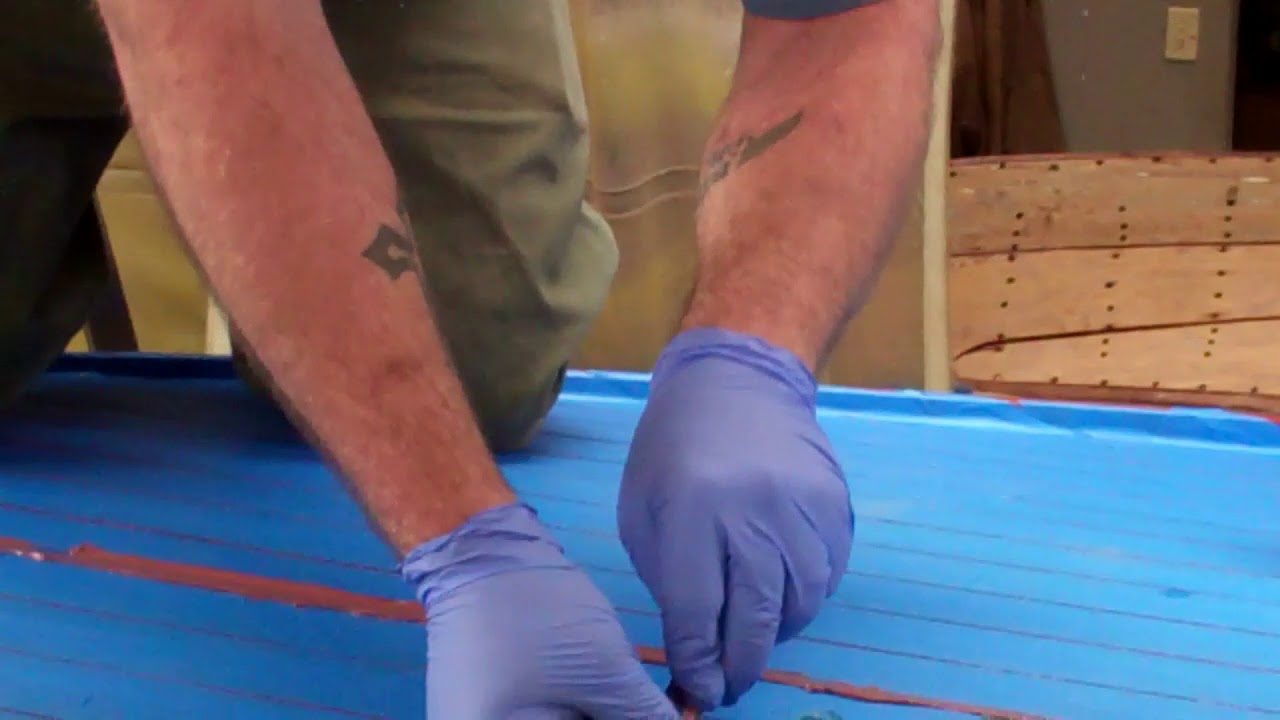 With her decks bleached with Daly’s Wood Bleach, sanded with 80 grit, stained with a Wood Kote Jel’d stain – red and brown mahogany in a 2:1 ratio – and sealed with three coats of Clear Penetrating Epoxy Sealer, Joe announced, “Let’s see how my years of window glazing and auto striping experience translate into delivering absolutely knife-edge deck seams.”
Let’s just say that Joe proved himself to be a master seam striper! With RJ assisting, the aft deck is finished and they are pulling tape from the completed foredeck as I type.

My 1940 16’ Lyman Custom Yacht Tender will be ready for varnish next Monday.

Lyman fabricated this model’s decks are simply carvel planked, but without any interior battens. The athwart frames are closely spaced, so the decks are plenty strong, but the seams are completely open and must be filled at least part way to render the decks waterproof.

We are using Mahogany Sikaflex 291 LOT, with the acronym standing for Long Open Time, which gives us ample freedom to work at a measured pace. The seams were filled almost to the top at their edges, but with a concave profile, which is consistent with my research and other boats in this model line built between 1938 and 1940.

Joe began taping using three-quarter-inch Scotch blue painter’s tape, which lines each edge, followed by a one-inch-wide strip that covers the plank completely. He very much wants to share from his experience that pressing the tape down and onto the wood’s surface with pressure across its width is critical to avoiding driving the Sikaflex beneath the tape, which translates into ragged, rather than knife-like edges. (He has one request, “Even though it is more expensive, Frog Tape produces a tighter seal and straighter line than Scotch Blue does. Pressing the Frog Tape down firmly completely seals the edge)

Note to self: order some Frog Tape for the next deck seaming.

People often ask how long procedures like this one take. Joe spent about five hours yesterday, and he and RJ worked about four hours this morning. The entire process used up about three tubes of Mahogany Sikaflex 291 LOT.
Varnishing her decks, so they can begin catching up to the nineteen coats on her topsides, transom, windshield, engine box and seating components!