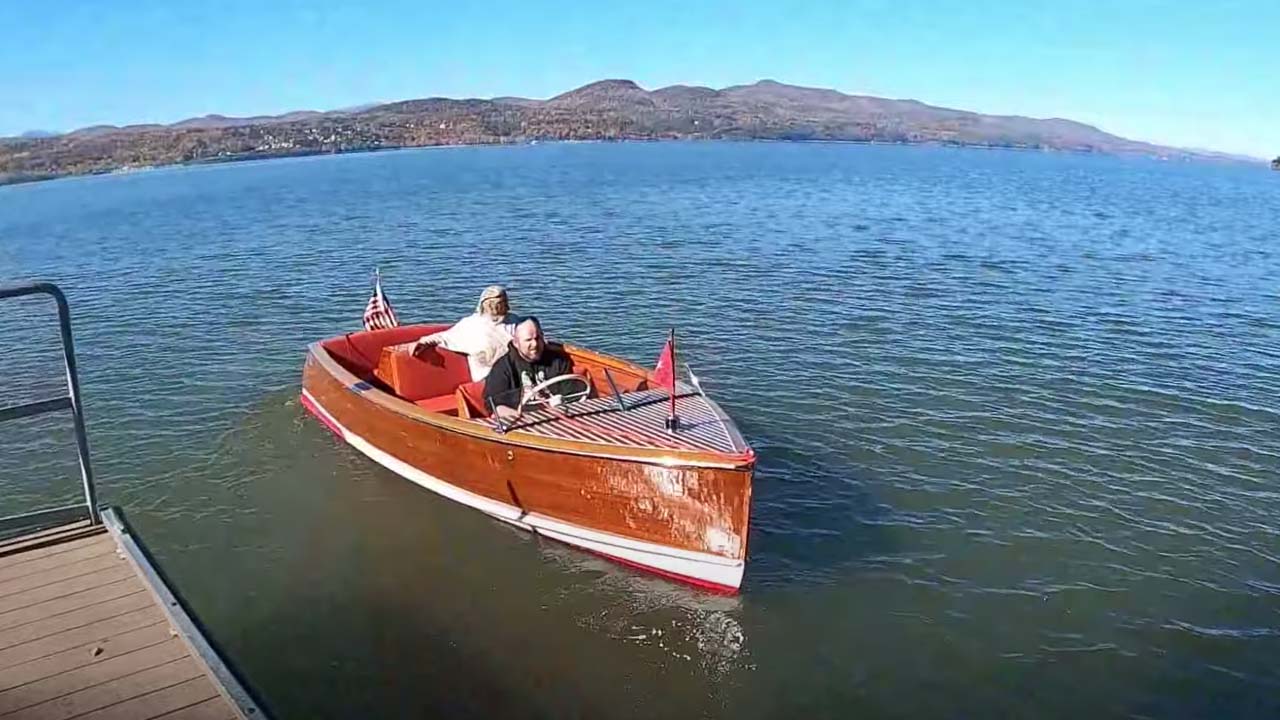 My 1951 18’ Penn Yan President finally got her sea trial, which she blasted through, but, just as we reversed her away from the dock and Joe hit the throttle, my GoPro shut itself down. Then my iPhone said, “I can do that, too, and did. So we have a disappointingly short sea trial video to which I spliced her debut video.

With so much super-generous guidance from renowned 1000 Island boat collector and restorer, Charlie Santi of Horseheads, NY, we have been able to return her to as close as we possibly could to the finishes, materials and color pallet she boasted the day she left the Penn Yan, NY factory in 1951. Thank you for both your generosity and patience, Charlie! I will allow the clip tell you the rest of the story, but, first, here is a bit of history I dug up researching this oh-so unusual Penn Yan inboard…

German-native Charles A. Herrman founded the Penn Yan Boat Company in 1921, with Headquarters in Penn Yan, NY. Penn Yan produced a wide range of wooden powerboats, rowboats, canoes and sailboats at its founding, but switched to all fiberglass vessels in the early 1960s. No records are known to survive. The name Penn Yan is synonymous with the Car Topper, which it introduced in 1936. Designed to be light and narrow enough to fit on top of most cars of that era, Penn Yan marketed it as being easily lifted by two people Herrman was an innovator as well. Among his most notable inventions is the Tunnel Drive, which Penn Yan patented. Using a cavity that partially enclosed the propeller and drive shaft, Penn Yan’s tunnel drive system delivered higher boat speeds and hull stability.

According to Bob Speltz (Real Runabouts), “A Penn Yan inboard could take the tightest turns, either way with a perfect “gravity” bank. There was no skidding whatsoever. Running down wind in a heavy sea will find a Penn Yan being able to run wide open because it is light in the bow and heavy in the stern. “Many of the smaller length inboards built back in the 1930s through ’50s had the habit of nosediving when the throttle was cut way back. Penn Yan inboards with the front seat loaded to capacity and the stern seat empty, and ignition switched off at full speed to drag the propeller, will instantly lift its nose and settle into the water like a duck. A Penn Yan takes a wide-open throttle from a standing start. It lifts its nose instantly and “gets up and out of the wet” in a hurry. Penn Yans were also easy to steer; with the engine and rudder mounted so far aft, the constant fight of the rudder just disappeared. “The stern engine arrangement used by Penn Yan was used ever since 1932 and enjoyed great acceptance by all who owned such boats. Each Penn Yan inboard came equipped with a safety strut which was one-piece bronze casting attached to the transom carrying both the prop shaft and rudder stock. It was so rugged it could hardly be destroyed. “It has the effect of boat length behind the motor without hull buoyancy in that position, and that produced running characteristics we have already mentioned that were hard to believe. A safety feature lies in the fact that the prop is not under the bottom of the boat, and in any collision or grounding could not be driven up through the bottom of the boat, thus resulting in a sinking. The prop and rudder could be inspected, freed of weeds, or changed with the boat afloat. No stuffing box is required on the rudder stock, thus eliminating a possible source of leakage”

Well, I can tell you that this Penn Yan performed precisely as Speltz describes. She was on plane already at 1,000 RPM, and by 2,000, she was kicking up a rooster’s tail. Joe cranked the wheel and she simply carved a turn without any slippage.

What an incredible design, one that is both iconic and a joy to use for romping across the water.