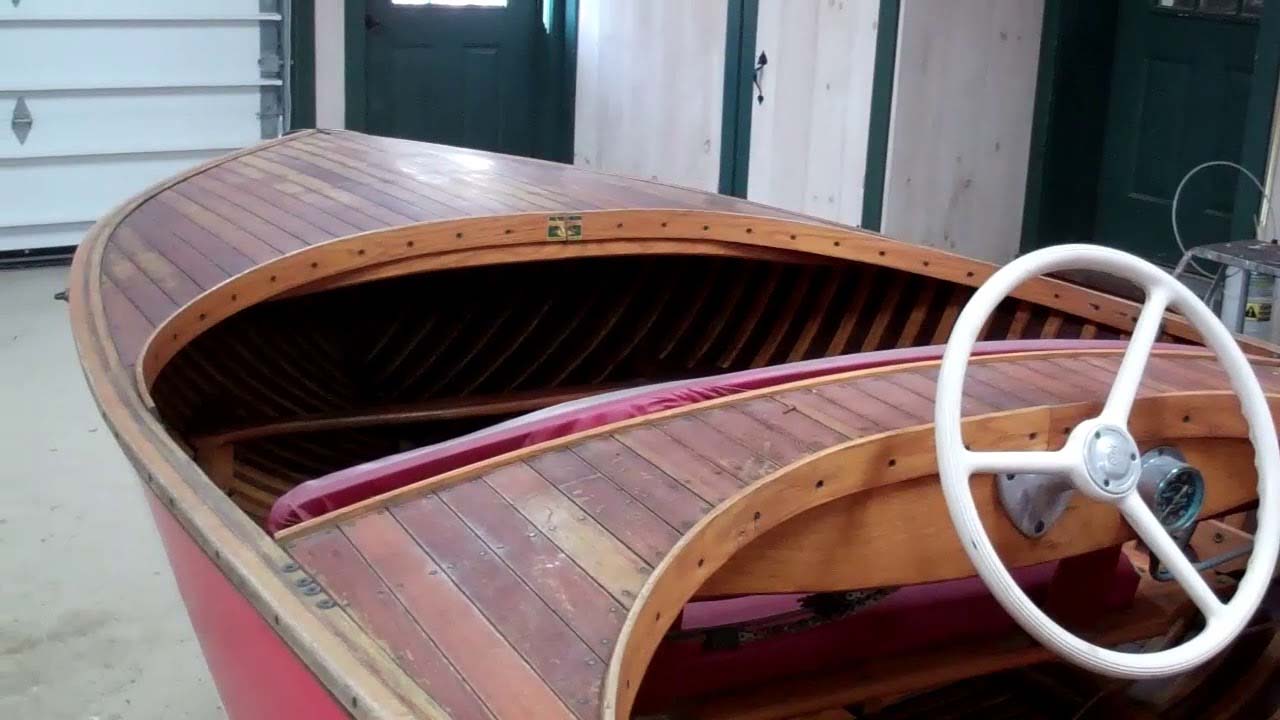 First and foremost, thank you to our Seattle-WA-based owner for entrusting his 1953, 12-foot CZT Penn Yan Swift, HIN CZT 2351, to a comprehensive preservation we at Snake Mountain Boatworks will execute.

While a final decision has yet to be made, in all probability we will also restore her Tee Nee trailer. She is powered by a period-correct mid-50s 18 HP Johnson Sea Horse that is now in the hands of Fran Secor, Otego, NY, outboard guru par excellence, who many of you may have met at his display during the Clayton, NY ACBS boat show each year.

The boat was last in Alabama, and advertised as original and little used. That such is the case was confirmed yesterday while I did some initial deconstruction so I could remove the outboard and its controls.

Simply put, nary a “hurt” is to be found, even on the closest examination. I was only able to find eight non-original fasteners, and those secured the four aftermarket cover batten holders. There is not a single damaged, rotted or broken rib in the entire hull. The worst “damage” where some scuff marks beneath the helm station, probably from when someone ran her wearing the wrong footwear.

Her canvas is original, but badly painted. Stripping it with a remover risks also releasing the filler/fairing material that is applied and scrubbed into the fabric as the final step in installing the canvas.

Rather, we will hand (block) sand the canvas on her transom and hullsides, wipe it down with acetone and then prime and paint it.

The bilge, seating components, transom interior and interior hullside surfaces appear to have been last varnished ages ago, which has contributed to what can only be recognized as elegant coloration and patina. We will not strip this bilge. Rather, we will first scrub it with soapy water and Scotch Brite pads or something like 220 grit paper, and wipe everything down with Acetone. We will then apply two to three coats of Sikkens Cetol Marine (not the high gloss variety).

Her decks, gunwales, rub rails and spray rails (post being released) will be stripped to bare wood, faired the little bit that will be needed, stained, sealed with CPES and varnished with 12-15 coats of Pettit Hi-Build varnish.

For now, however, as she’s back in the queue of boats awaiting preservation, I will scatter dryer sheets throughout her interior and then move her back into storage until late winter, 2020.