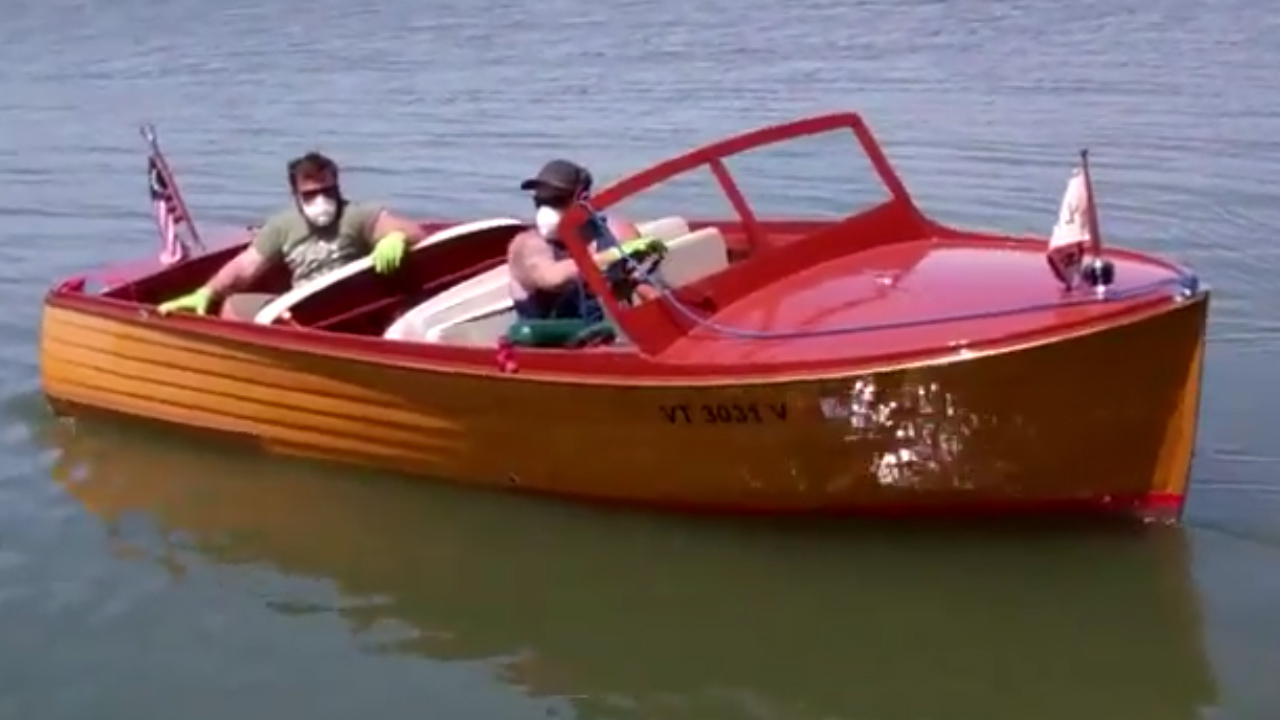 Now that is a Milestone! Susan, who is a 1940 16-foot Lyman Yacht Tender with an rear cockpit that faces aft.

Other than having been stripped of all her finishes and preserved to our Snake Mountain Boatworks standard, and some repairs to her windshield and garboards, her hull is completely original.

Extensive research throughout Lyman World convinced us that her topsides had been finished brite at Sandusky, and have stayed that way since.

While she was flipped over, I spent way too many weeks beneath her removing decades of dirt, scuzz and old finishes, but I did so while preserving the fact that she’s been in service for some 80 years. Once cleaned, I stained all surfaces with Sandusky natural stain and applied four coats of Sikkens Cetol Marine – not Gloss.

After setting all of her clench nails through mahogany strakes below the waterline and cypress strakes above, we sanded her fair.

(The fact that, even though she’s not floated for over 20 years, and we expected some infiltration during her sea trial, neither bilge pump activated even once. Was there any water in the bilge other than that leaking in while we adjusted the prop shaft and rudder stuffing box? Yes, but so little that nothing came out when we opened the bilge drain.

All surfaces were sealed with four heavy coats of CPES, and then varnishing began and continued until we had applied 40 coats to her topsides and 30 coats to everything else using Pettit High Build varnish, which is now Pettit Flagship High Build.

Mickey Dupuis and his team transformed tired, pitted, and just awful into the jewelry you see here.

Loadmaster Trailer Co, Ltd, outdid themselves once again designing and fabricating a trailer that not only supports Susan completely, but almost hugs Susan during retrieval. Never before have we experienced such a smooth, effortless loading!

Now she can come home to Susie and Dana, longtime Lyman aficionados, But perhaps the best part is that, since her new stewards live on northern Lake Champlain, we have good reason to hope we will see much of them and of Susan.