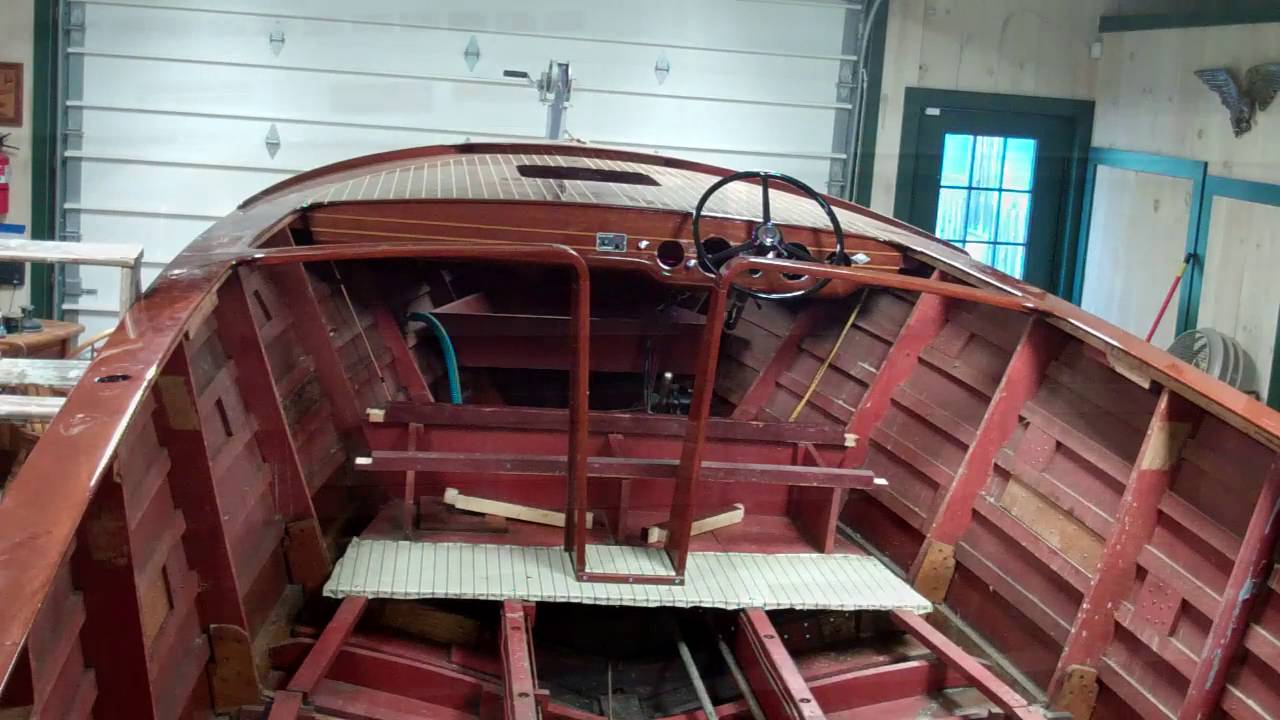 She was shipped from Algonac, MI to Ahmic Lake in Magnetawan, Ontario, which is about 60 miles north of Port Carling, Ontario, in 1946. That owner, having failed to insert the drain plug, allowed her to sink the very first night she was on the water.

Taking it as a bad omen, he offered it to the grandfather of her current generation of owners for a pittance on one condition, “Get it afloat and away from here by week’s end.”

Grandfather did, and she has served this family loyally ever since.

Our work to date involved releasing everything fastened to the hull, save for the steering wheel, which we will release prior to flipping her next week.

Her engine delivers 150 psi in all cylinders, but her oil is milky, indicating the presence of water entering the lubrication system somewhere in the engine. She does produce good oil pressure, but something is lurking somewhere down deep inside her. We will drop her oil pan, which is full of sludge, and begin a diagnostic examination therefrom.

Once we have the hull flipped, we will launch into replacing her oil-soaked bottom with a True 5200 bottom. However, the evidence presented in this clip portends discovering major issues with at least four frames, the garboards and possibly the keel itself.

Her chines have been replaced, at least from the stem to just behind the engine, where the new chines are butt-jointed to the original ones. How do we know for sure they have been changed?

Every “repair” some well-meaning, but marginally competent person executed shows as brilliant blonde against the Chris-Craft red bilge paint. That is correct. This “craftsperson” did not care enough about his work to finish it by applying several protective coats of bilge paint. (Makes one wonder what other shortcuts were taken that we will find as we dismantle her bottom.)

On the plus side, and despite my rant, everything else about her evidence that her owners maintain her with painstaking attention to detail.