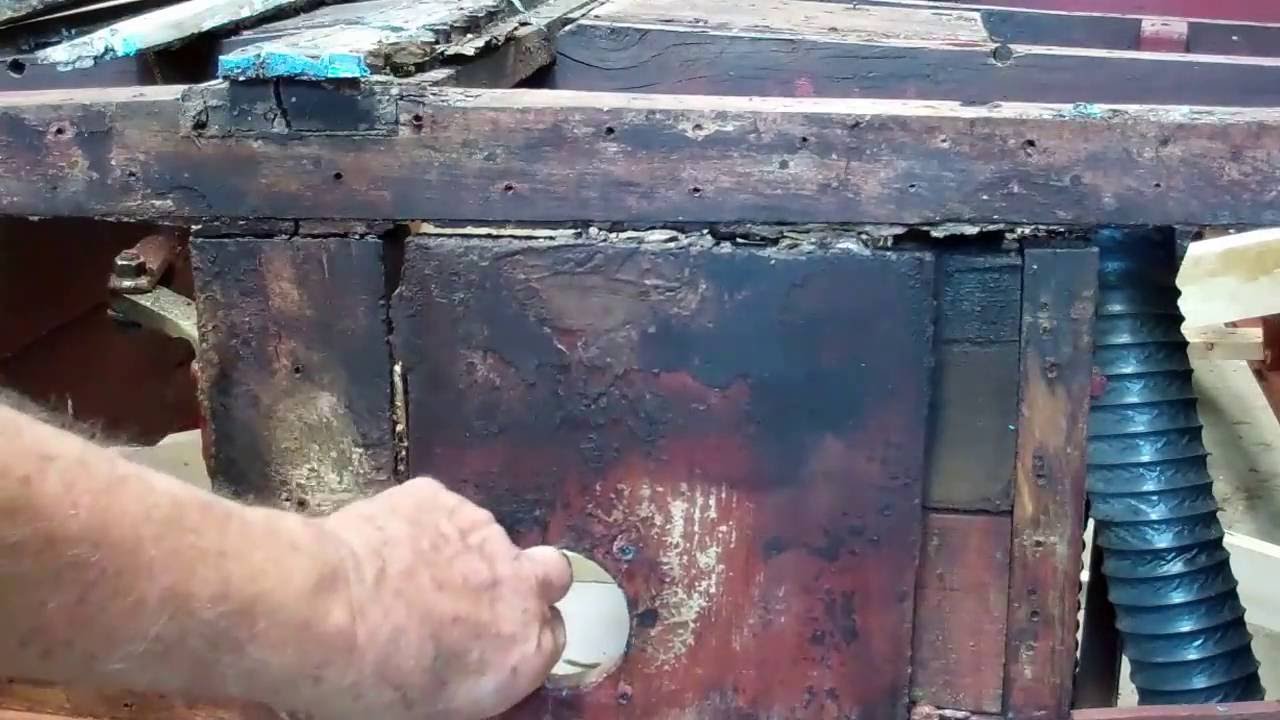 By Friday we have deconstructed the 1946 U22’s bottom, chines and chine planks, and are ready to begin fabricating new framing components, including most of the chine frames.

But as John was removing the bottom transom plank on Friday, and I was “happily” scraping grease from frame elements forward, he exclaimed, “That’s why she’s hogged!”

He could not have been more correct. The bottom bow, while it is in excellent condition, has broken away from the transom framing completely. My prime suspect is the lifting rings and the possibility that the boat spent long periods of time hanging from them. The aft ring‘s mounting bracket wraps beneath and around the bilge stringers. But, while it thereby supports the weight of the engine, the sheer strength of the fasteners elsewhere are all that is keeping the aft end of the hull from drooping.

Since most of those fasteners are (failed) stainless steel bolts and screws here, it is not surprise that their failure contributed to the bottom bow, and with it, the transom and aft parts of the topsides, dropping away from the stringers and nearby transom framing.

Our challenge now is to reverse this situation, which is likely years, if not decades in the making, either by stripping the transom planking completely, or, if we are lucky, clamping all these components back into place and then fastening them anew.

Ideas and suggestions from the community will be welcome indeed!

Bot chine framing butt joints on starboard are short, with almost 1/8” voids evident between the end of the original and replacement sections. And, what was buried beneath filler on port, there was none on starboard, which exposes a myriad of stainless steel carriage bolts holding – sort of – the two sistered joints together. That I can move the aft end of the aft sistered joint on starboard, plus the presence of the stainless carriage bolts means that “making do” with what is there now is to go on a fool’s errand.

We will release and replace the patched piece of chine frame on one side at a time. (Even though we have heavily X-braced the hull, releasing both patches simultaneously risks the hull deforming in ways that will be difficult to recover.)

Once both new chine frames are fabricated and installed, we will begin addressing all of the bilge frame issues.