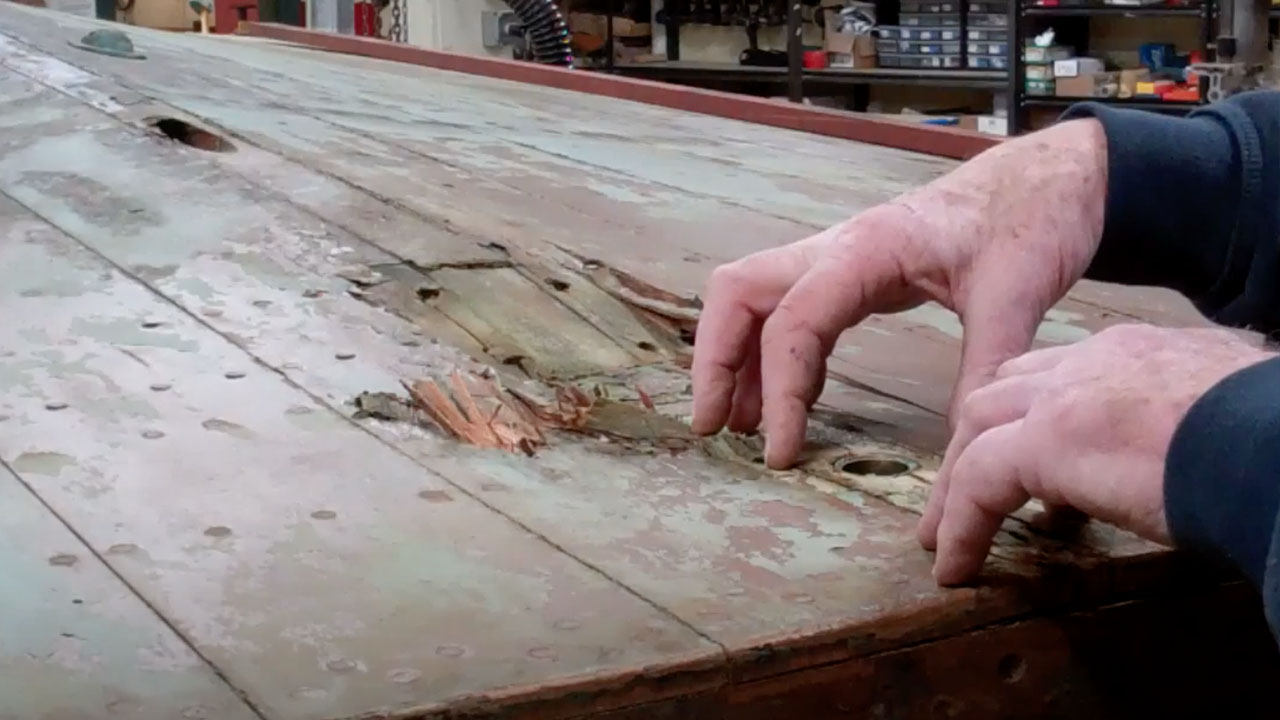 Phew! Rolling a Chris U22 is never easy.

A suggestion, when flipping clockwise when standing at the bow, tie a rope to the port side – to the port bilge stringer or other strong frame member. Run the rope over the port gunwale, under the boat, back up starboard side, up over the rolling bar ending up right back on the port side.

That way when she rolls you can continue pulling on the rope from the port side. She kick over beyond vertical. (We attach the rope to a winch for larger boats like a Chris U22.)

Be sure you have sufficient clearance above the floor as the boat drops when it has rolled halfway around. (We cheat by placing sheets of blue board where she is the widest.)

Remember, this is the Chris that bottomed out. The longitudinal, deep gouge in the fourth starboard plank outboard of the keel tells us that she initially bottomed there and that the damage continued aft, as we have chronicled in earlier videos.

In fact, her occupants should count their lucky stars that the rocks did not drive through the wood bottom, which would have almost surely sunk the boat quite quickly soon thereafter.

Having her upside down allows us to assess the situation and plan a path forward that, if possible, exposes all of the damaged framing without releasing the entire bottom. Happily, such is possible as the aft garboard and next planks extend only eight and ten feet respectively forward from the transom. Releasing these four planks – two on either side of the keel – should give us the access we need. (Note the “should.” We will only know for sure once the planks have been released.)

Since the center transom frame member was badly damaged and must be repaired, if not replaced, we must also release the bottom transom plank.

All that said, we will reach for our picks and Rotabroachs – search Amazon for Blair-Equipment 11090N-Rotabroach – and begin exposing and releasing fasteners.