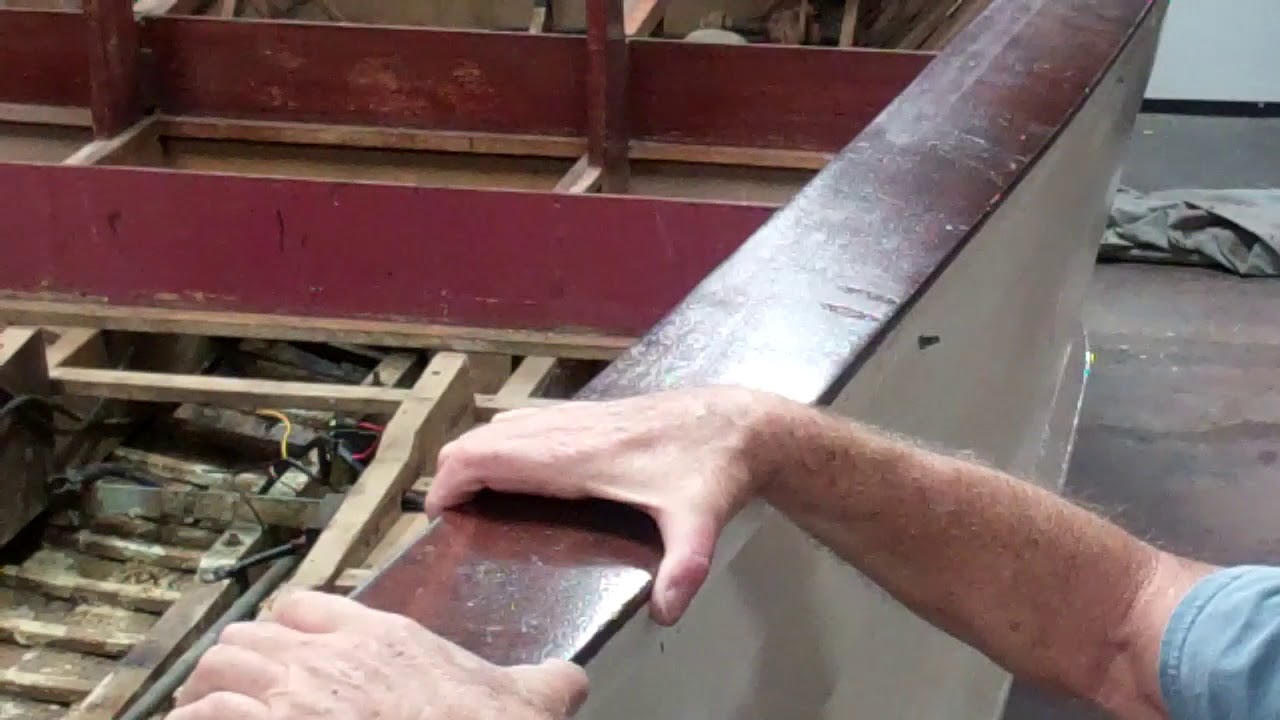 This 1957, 23-foot, narrow-strake Lyman Inboard Runabout never strayed from Ohio until I brought her to Vermont some weeks ago. Once we finish her complete preservation, she will split time between upstate New York, where her new owners have a summer home, and Austin, Texas.

Peter Henkel, Peter Henkel Inc., will rebuild her 125 HP Chrysler Crown engine. Indeed he’s already torn it down and reports that is both solid and clean. He will completely rebuild the long block and everything bolted to it, and have it sitting in my shop early next spring.

Other than the pretty standard weakness and splitting in the stem-gripe-knee area, her hull is as solid and unhurt as any Lyman we’ve worked with to date.

Being of pre-1960 vintage, she has a mahogany planked transom, which is in perfect condition. (We usually see some deterioration around the exhaust port, but even this wood is absolutely solid.)

According to Tom Koroknay, Lyman Boats, Legend of the Lakes, Lyman built 893 23-foot Inboard Runabouts from 1957 through 1960.

The 23-foot Inboard Runabout was one of the best rough-water boats that Lyman ever made… All of these inboard models were basically earlier versions that were stretched and widened until the desired length was achieved. Thanks to this trial-and-error method, the 23-foot hull was nearly the perfect combination of beam and length and featured the traditional Lyman soft entry, rounded chine, and slight dead rise in the stern….Standard inboard construction was used for this model.. but the ribs were increased to 1-1/8-inch width with the standard 13/16-inch thickness, and placed on 6-inch centers. These hulls could take a good beating. One of the most dependable workboats ever conceived, this model was used for everything from charter boats to water taxis to service boats for the Ohio Division of Natural Resources laboratory on South Bass Island in Lake Erie.

Our 23-foot has survived her first 60 years remarkably well. Nary a rib shows any sign of age let alone any rot. The softness we typically site in the aft corners of the bilge is nowhere to be seen here. Her gunwale and deck framing are, for the most part true and sound. (Someone did crank the forward lifting ring down about 3/4-inch too far, so we have addressing a hollow in her foredeck in our future.

While she is structurally sound above the waterline, someone has released the covering boards and then installed them anew without any sort of adhesive and using far too few fasteners. Those we can find appear to be common finish nails or bards. We must release and reinstall both of them.

That said, this situation is actually a blessing in disguise. With the covering boards released, we will be able to clean and seal the gunwale frames and undersides of the covering boards with copious amounts of Clear Penetrating Epoxy Sealer (CPES). Then we will install them one more time, but now bedded an appropriate adhesive.

Finally and sadly, someone chose to replace the port foredeck panel with other than ribbon cut mahogany veneer plywood. The result is, well, just awful. We will replace the foredeck completely, using proper ribbon cut ply for sure. Doing so affords us access to the foredeck framing, both for purposes of addressing the hollow referenced above, and also for sealing the framing with CPES. She has lots of paint on her topsides, which can sometimes hide a host of issues, both major and minor. We will know more on this score once we have cleaned and applied Sandusky Paint Company Lyman sand tan bilge paint to her bilge.

The bottom, and especially the garboards appear sound, at least as far as we can tell lying on our backs. We will know much more once we have braced the cockpit area and rolled her over. First we will scrub and scrape the bilge clean – way too much fun for sure!