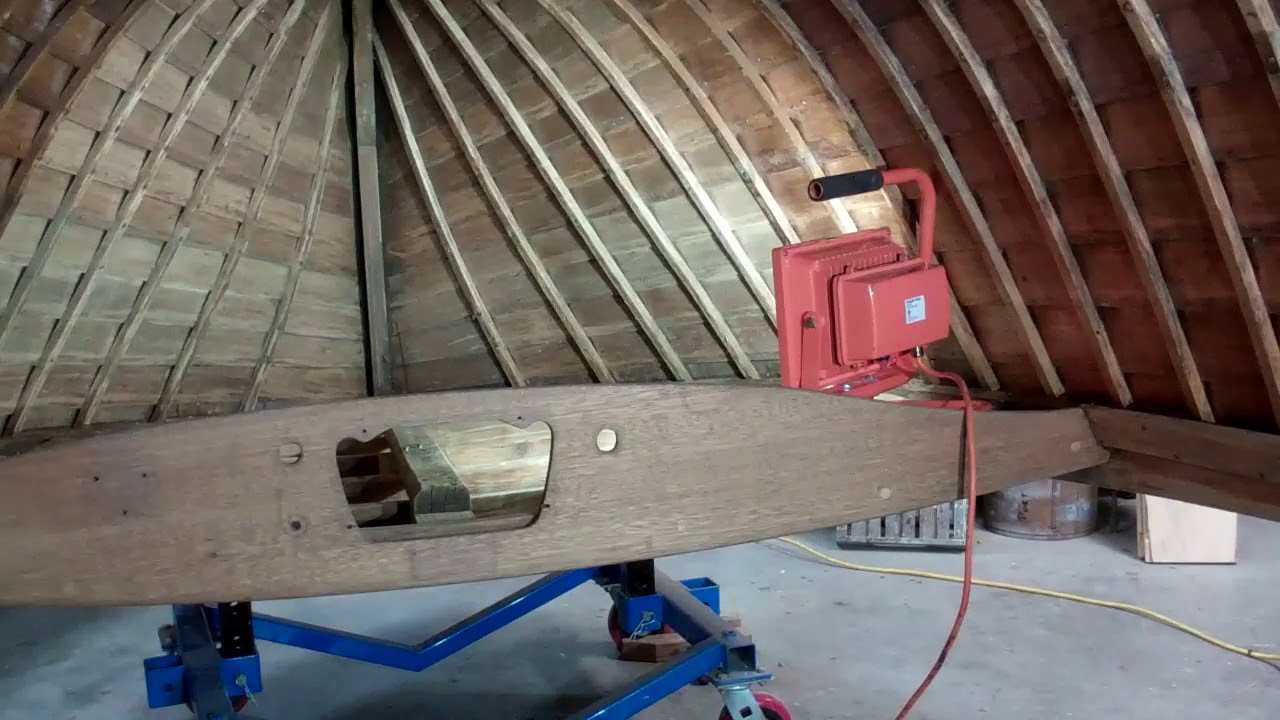 What a “wonderful” work environment! Not! I have enjoyed two weeks “down under” the flipped 1940 Lyman Custom Yacht Tender hull removing all traces of paint and varnish and then sanding all surfaces smooth.

Finally all surfaces have received at least one CPES application, and the bilge and transom have received three. I will next apply a second coat of CPES to the interior topsides, and all of it will be ready for finishing.

The bilge will receive three coats of Sandusky Lyman Sand Tan bilge paint up to the floor level. How the interior topsides are finished remains TBD at this point.

As is evident in previous videos, she arrived painted – blue, green and finally tan – up to and including the stiffening rail that runs longitudinally about halfway up the topsides inner face, and varnished from that rail to the gunwales.

Thanks to the New England Lyman Group, and the 1941 catalog a member shared, we know that Lyman offered a base configuration that buyers were invited to customize. The aft seat could face forward or, in very few cases, aft. The exterior could be finished bright or painted white. The interior was offered completely varnished from gunwale to keel, but owners could specify various combinations of bilge paint and varnish according to their wishes.

Susan’s original owner chose the completely-bright option based on what I found when stripping the paint. After an informative dialog with the NELG membership, and with the help of Ryan Koroknay, I confirmed that the inner-most, oldest layer, a bilious robin’s egg blue, had been applied directly over varnish. Very careful scraping yielded several paint chips with strong evidence of varnish on their inner sides.

Susan sports cypress topside strakes from her waterline to her gunwales, or so I thought. However, once I had everything clean inside, the strakes running between the stiffening rail and floor level are noticeably darker than those from the rail to the gunwale. And there is evidence of the speckled grain that we often see in early mahogany planking.

So … what to do? Finishing everything bright down to the floor is my preference, and my research, which informs me that bright is how she left the Sandusky factory.

We will do some test varnishing early next week once the final CPES applications have cured, and make a final decision then.

Any ideas or preferences you wish to share will be most appreciated!
Time to go down under again, armed with a 3” chip brush, respirator, fan for fresh air and a pail of CPES!