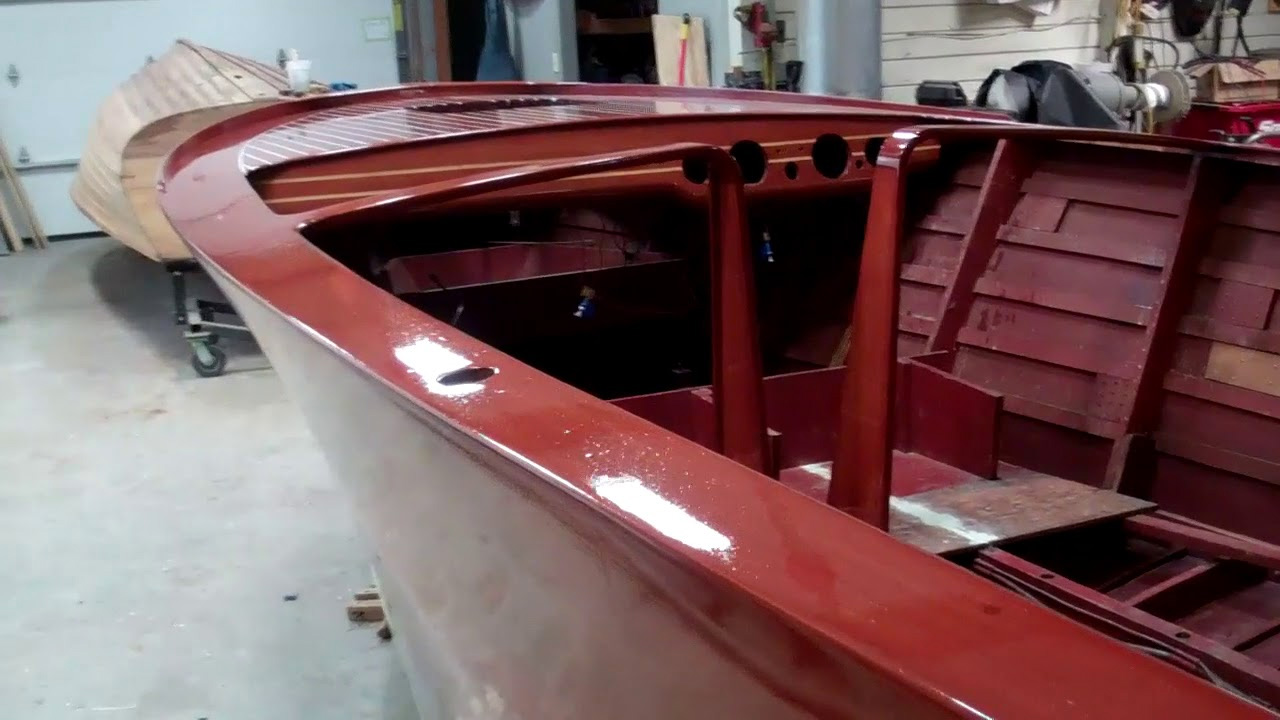 Varnish! With seven coats of Interlux Perfection Plus Two-Part Varnish having been applied, combined with hand block sanding after four coats, our 1946 Chris-Craft Brightside U22 is finally showing her elegance.

Flat and declivities, pits if you will, are antonyms, one cannot exist is the presence of the other. Varnishing involves building film thickness, but also requires exceedingly controlled hand sanding periodically as it builds. Why?

As Danenberg recommends, the sanding you did ahead of staining your hull stopped with 120 grit. (We stop at 80 grit.) The surface feels so silky smooth, but it is not. Reach for a strong magnifying glass and be prepared for a shock. Viewed in cross-section, the surface is literally a sea of hills and valleys.

Yes, you used filler stain and absolutely scrubbed it only across the grain, which does fill some of the valleys.

Even then, if viewing the surface at high magnification were possible, your “silky smooth” would conjure images of a moonscape.

When applied, varnish begins filling those valleys – pits in boat talk, but it also adds a film of equal thickness to the peaks. No matter how many coats you apply, unless and until you sand off the mountain tops, you will never achieve other than a cheap mirror reflection.

Be careful what you wish for, however. That sanding must be controlled so that it attacks the peaks without invading the valleys. Otherwise you never build film thickness uniformly across the surface. So sand, yes, but not so much that you are at risk of denuding peaks of all their varnish.

We use 220 grit paper mounting on a hard rubber sanding block after the third and seventh coats. John has begun sanding the entire hull, to which we have now applied seven coats, using 220 grit. He and RJ will then apply three more coats, at which time we will sand again, but now using 320 grit.

We will sand with 500 grit once the following three coats are applied, and then 600 grit after coat sixteen and 900 grit between coats nineteen and twenty.

The relative amounts of shinny declivities and absolutely flat surface area shrinks exponentially as we continue sanding periodically with ever-finer grits. Once coat twenty is applied, we will allow the varnish to cure for up to a month – two weeks with Perfection, before we begin buffing the surface, which morphs it into a gloss that appears miles deep and distortion free. Just like an expensive mirror’s silvered surface, it will finally be super flat and therefore super glossy.