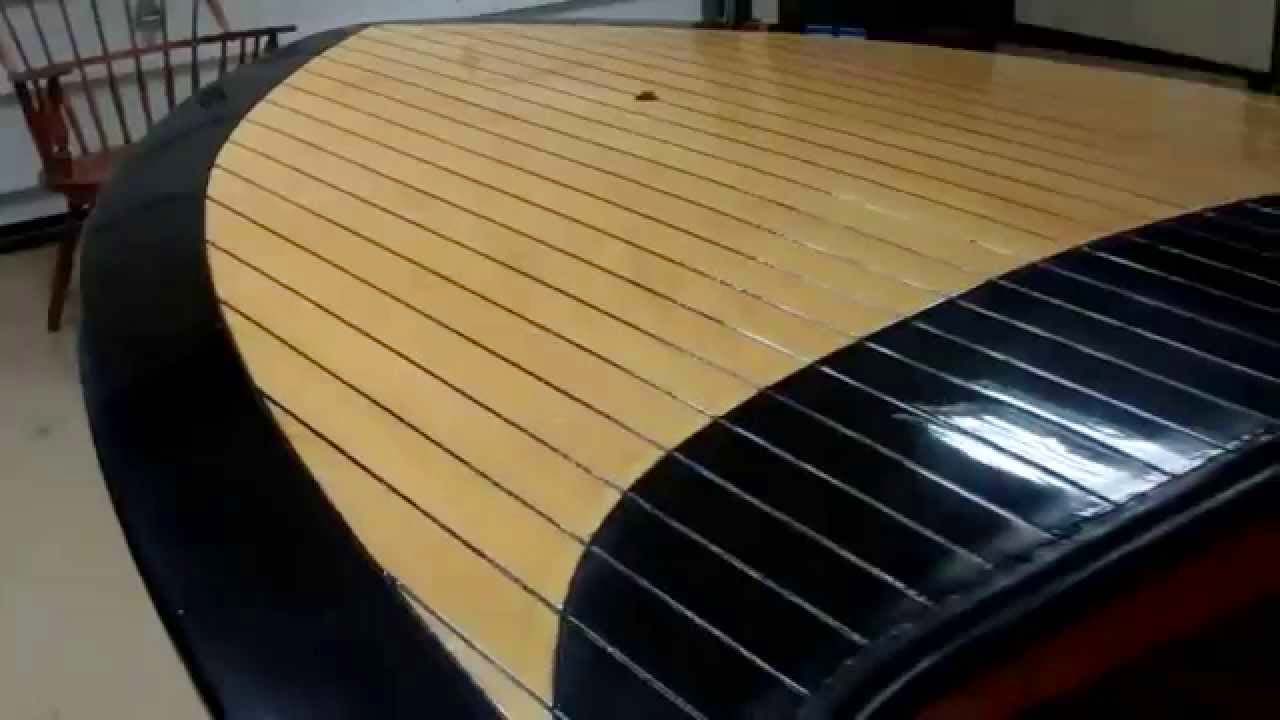 She arrived from Long Island, NY last fall, incredibly original throughout, even if a bit tattered cosmetically. As I began deconstructing her, and found the cockpit and bilge fasteners virtually impossible to back out, it quickly became apparent that the seats, ceilings, gauges and floor panels were being removed for the first time since she left Century Boat Company’s factory in Manistee, MI in 1956.

We have saved her original cowhide upholstery, save for the seat cushions and ceilings, and the latter were fabricated using a bolt of NOS cowhide fabric sourced through A&A Marine. Her original 1956 30 HP Johnson Sea Horse was really stuck hard, but we freed it up and have learned from the fellow restoring it that the power head is in great shape. We will end up with a completely restored, numbers-matching engine.

Here Avodire decks, aft hatch and transom were stripped to bare wood, even though doing so was a difficult decision. This boat came to us still in her original varnish, but even applying every finish restoration technique I learned in my decades restoring antique American clocks could not overcome the fact that the finish was just too tired to save.

We sanded the topsides and covering boards flat, primed them with four coats of Jamestown Distributors’ new TotalBoat topside primer. Sanding between coats gave us a perfect foundation for the 9 coats of black TotalBoat Wet Edge Topside paint we rolled and tipped onto the hull. Jamestown has hit the ball out of the park with this new line of paints!

The Avodire decks and mahogany transom were bleached three times, stained and sealed with three coats of CPES before we began rolling and tipping 12 coats of Pettit Hi-Build varnish. Here she is, with hull # P5652 still punched into her glistening transom, and her deck seams painted with our topside paint, as Century had done some 58 years ago.

ll the hardware is back from New England Chrome Plating and American Metal Polishing.

We are chafing at the bit to begin putting her back together. Be sure that we will update you when we do.