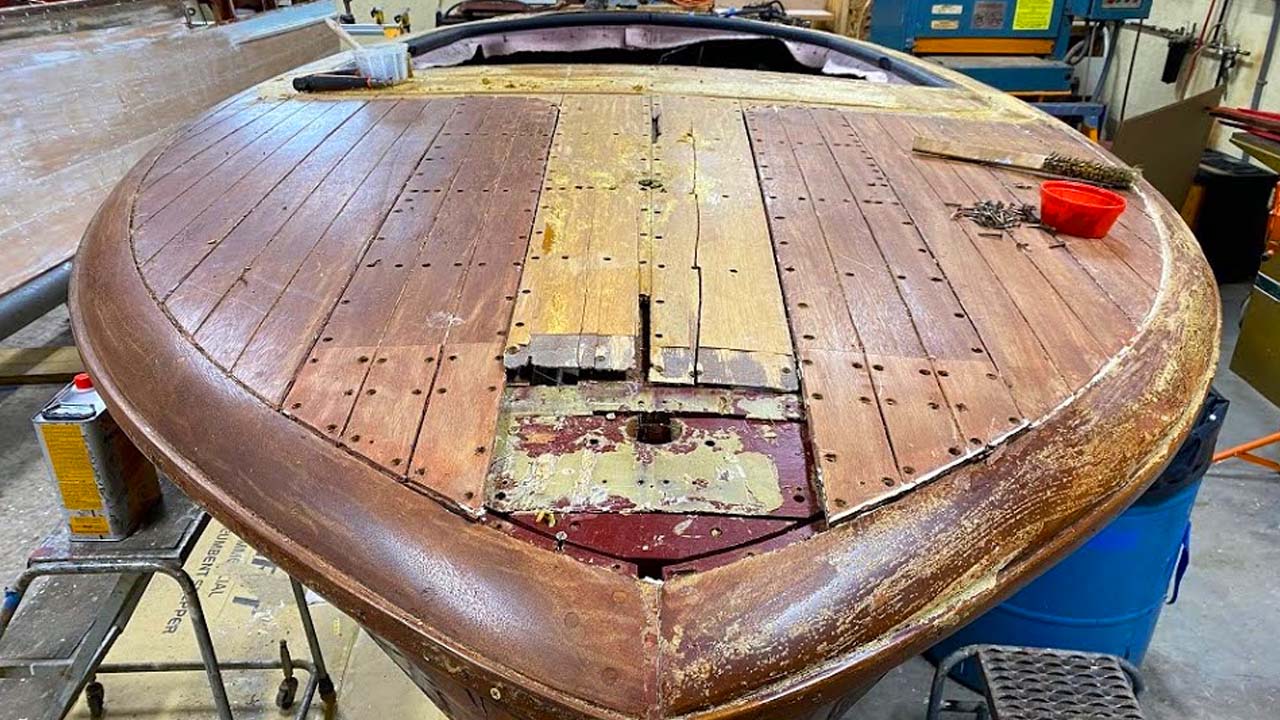 Shoddy butchers is the nicest thing I can say about the crew who raped the foredeck on our 1956 Chris-Craft 19’ Capri.

It would have been trivially easy to simply release these four planks. But no. Let’s just saw athwart the foredeck, fashion incredibly silly scarfs and rabbited joints using mahogany that does not come close to the original.

And why not at least bleach the entire deck so there is some hope that the new, incredibly mismatched planking at the bow melded at least a little with the rest of the deck. I have no idea how long these rapists were at assaulting this Capri, but it took us eight hours to extract all the worn-out screws, cut through whatever glue they reached for, and release the four planks and the patches.

Oh, and why oh why would these guys pay 3M 5200 where Sikaflex belongs?

It would have been professional to return everything to its original position using consistent, NEW silicon bronze Frearson wood screws, but no. Why not just reach for the screw recycling bucket and use whatever is in the first handful pulled out therefrom?

Then there is the truly shoddy work done at the bow beneath these planks. A major frame member is not even secured at its port end.

Enough. When we are finished, this travesty will be impossible to see.

And … Today was bilge-cleaning day for Anthony. Armed with a Sandvik scraper, a gallon of Roll-Off, and a quart into a spray bottle, he weighed in; sadly, not for long, however.

Starting deep down next to the keel and keelson, he began scraping the interior surfaces of the inner planking – the approximately eight-inch-thick planking that was laid in at about a forty-five degree angle.

“OMG!” erupted from the bilge. Anthony’s scraper buried itself in severely rotted wood with the first several swipes at scraping the external layer of grease off. We tested elsewhere with the same result. Virtually all of the bottom’s interior skin from the keel to the bilge stringers and from the helm station to behind the transmission is just gone.

Releasing the bottom is the absolutely last thing her owner wants to hear, but I am guessing that we will find similarly rotted exterior planking – at least on these planks’ inner faces – when we begin releasing the bottom planks.

At the risk of beating on a very tired old drum, here again is why other than guesstimating what preserving these ancient vessels will cost is tantamount to rushing into a fool’s errand.