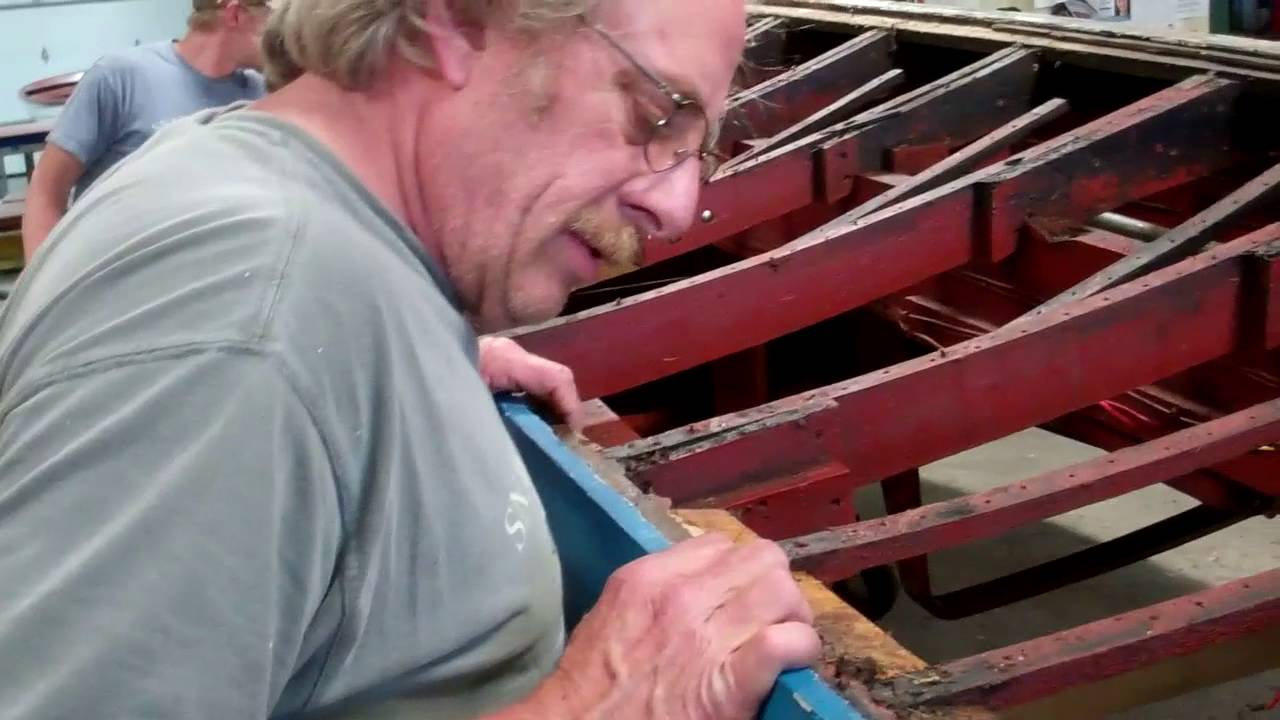 Maybe half a milestone? As of today’s close, the U22’s starboard bottom planking, both inner and outer, is completely released. Eighty percent of the port side bottom fasteners are out and filling paint cups.

What did we learn? Beyond copious amounts of old grease and oil throughout the bilge, and aside from the insults suffered by her chine framing and multiple major ribs, the hull’s framing is quite sound. Her stem is solid with no rot or splits evident anywhere.

Save for those that were butchered in a failed effort to repair three of them, the ribs forward of the engine appear sound upon an initial inspection. We will learn much more post-degreasing.

The major frames beneath the engine bay have soaked up so much oil they must be compromised.

We could spend hours releasing and trying to pull all that grease out of the wood, but time is just better spent, and the hull will be much stronger if we simply use what exists now for patterning and then fabricating new white oak frames. My initial guess is that we must replace all of them from the front end of the engine bay to and including the one standing just forward of the transom.

Notice the steam bent battens that shape and stiffen the bottom between each pair of major ribs. I compared batten to batten starting at the transom and proceeding forward to the stem. While they are the same shape, have the same radius, within each bay, that radius shrinks, and the battens exhibit increasing curvature when moving from the transom forward.

At least on starboard all of these battens are holding paint, even though they are externally greasy. We will carefully record the order and degrease each batten, followed by filling every fastener hole with toothpicks and Gorilla Glue.

The chines are the most worrisome, as we suspected would be the case when we examined the bilge once the hull had been emptied. The “repair” of the chine framing weakens the hull amidships, precisely at the point where the engine is delivering the most torque. That this person’s now famous sistered butt joints are secured with stainless fasteners makes his/her work all the more problematical.

Remember, when inserted into wood at or below the waterline, and therefore into an anaerobic environment, stainless degrades to mild steel, which is prone to rust and rapidly declining integrity. We have no choice. Due to even more sistered butt joints that were “secured” with Robertson stainless square drive fasteners, the chines must already be replaced. (That the “new” chines are white oak and of entirely different dimensions than are the original mahogany chines, makes replacing them all the more important.)

We will update our view of the situation and the issues late tomorrow, after we have released all of the port side bottom planking.