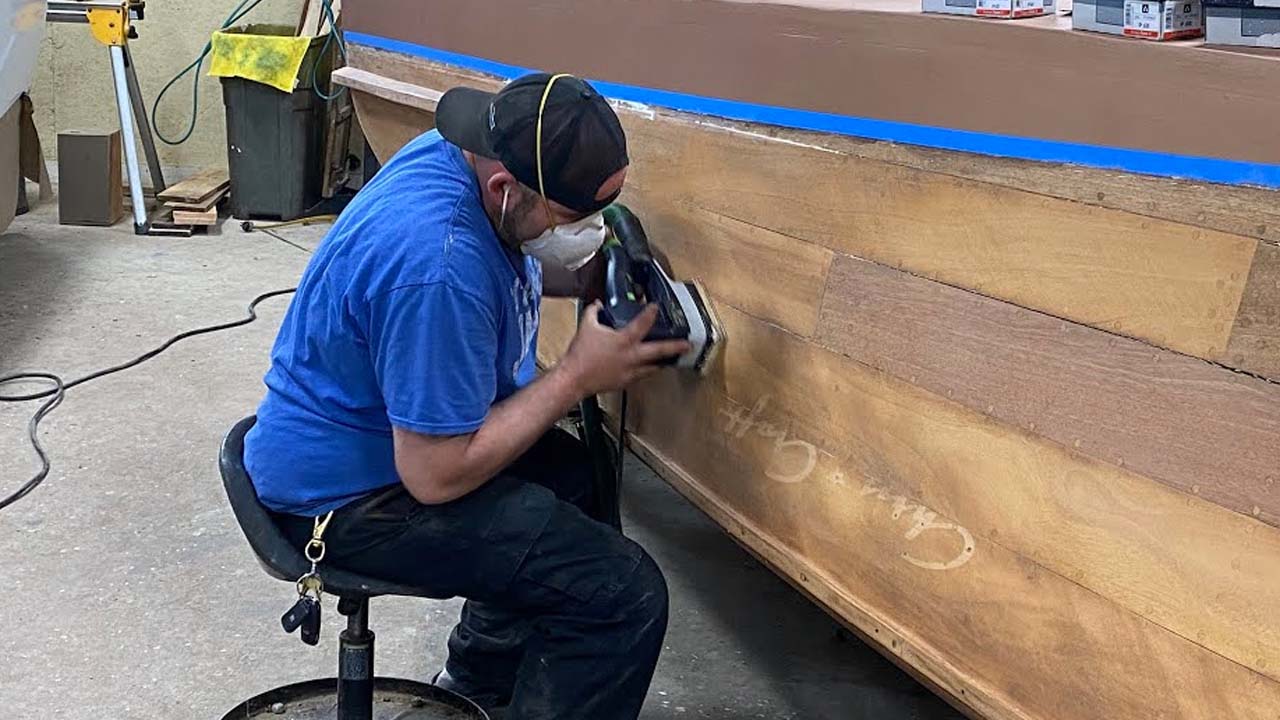 How I wish that wood boat enthusiasts and self-styled restorers never discovered orbital or random orbit sanders! Why? There is no better way to transform reasonably fair planking into a moonscape. Sadly the guys who butchered this 1956 19’ Chris-Craft Capri Runabout were not satisfied with destroying her foredeck, her engine bay hatch cover and so much more. Nope. They also felt a need to have their way with her using orbitals.

We have her topsides stripped, and I began doing some sanding while we were closed, but Joe is our go-to guy for fairing hullsides, decks, transoms and more. Now that we are open and working behind locked doors, Joe can turn his attention to fairing her hullsides to perfection.

Doing so, however, is hugely time consuming. Using only an inline sander, Joe begins by drawing slanted pencil lines every few inches along the hull. If the surface is fair, the sander follows the surface and the line evaporate uniformly. However, the damage the butchers wrought was immediately evident when we began sanding and only bits and pieces of lines sanded away. He will sand across the grains, guided by the lines until he reaches the stern and has the entire hullside absolutely fair. But now he must sand with the grain until all the deep 40 grit scratches are gone.

(We would normally reach for our Hutchins 16” longboard pneumatic sanders for this task, but, thanks to Mr. Murphy, all three of ours decided to fail today. A new one is on its way and it will be used for the next stage of Joe’s fairing process.)

That will be accomplished by first sanding with the grain using 60 grit, followed by doing so one more time with 80 grit.

Then it will be bleaching time, and bringing out the Daly’s A & B Bleach, which we mix 3:1 B:A, which achieves an absolutely white snow field once the wood dries after being kept wet continuously for at least six hours.

Staining is just peaking its head over the horizon. Soon ………..