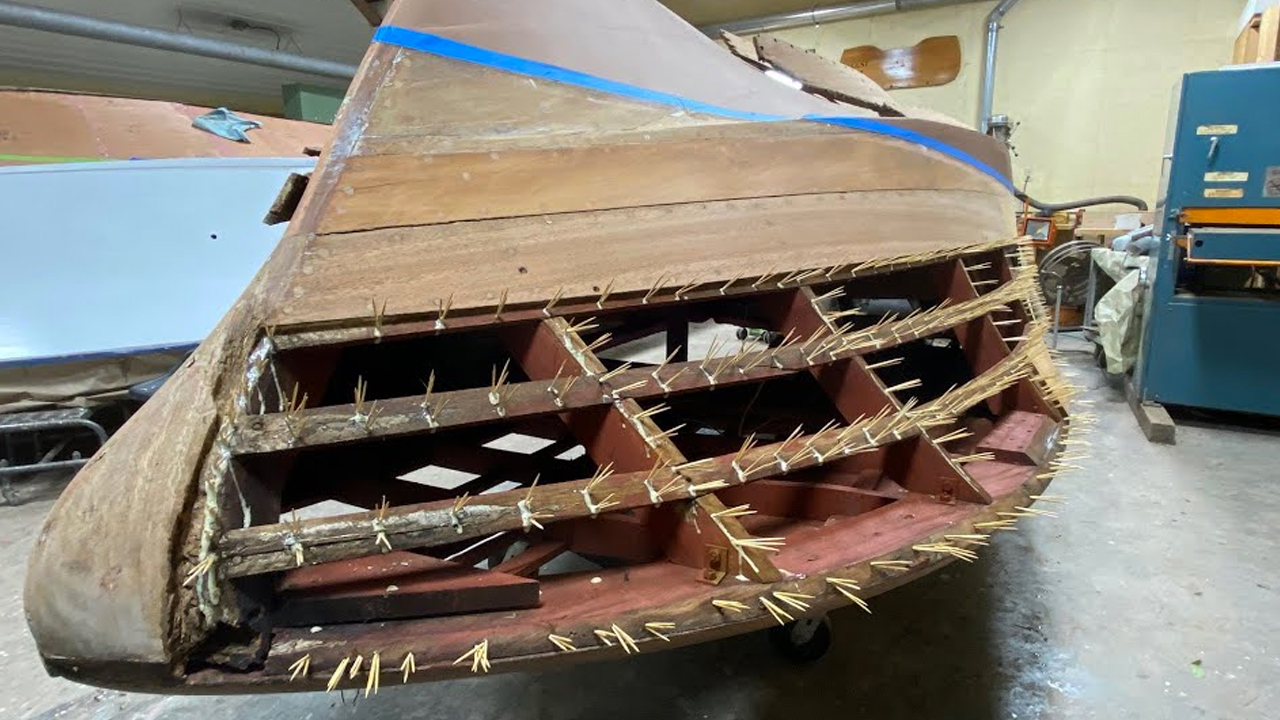 As is so often the case with antique and classic wooden boat preservation, vessels tend to keep secrets. Our 1956 19′ Chris-Craft Capri Runabout gave no hint of what previous butchers had done to her and the horrific water trap they created in the process.

She let us in on this secret yesterday as Joe was finishing sanding her topsides fair. “We are almost to bleaching! I have only the last four or so feet to do on each side and I will be at the bow.” Right. Then his inline sanded started throwing up chunks, and suddenly, he had broken through a plank just aft of the bullnose bow.

Careful probing told the story. Our Capri’s bullnose is severely rotted along its starboard margin, as are the forward ends of the top three planks. One plank on port is rotted through as well. All of it is because the butchers were too lazy to address foredeck framing issues properly, by releasing planks rather than reaching for a circular saw and simply making an athwart cut through them all the way across the deck.

A sloppy athwart seam butt joint “repair” failed, of course. The seam opened at some point, allowing water to infiltrate and keep the planks and bow wet. Talk about a perfect storm for rot! As I explain in the clip, Joe will address the bullnose rot using a Dutchman repair. Then the offending planks will be replaced, which is both best for the boat and likely also best for her owner as it’s a least-cost path relative to trying to scab new planking onto the ends of the existing and rotted planks.

Now that I have released the damaged planks, I am tooth-picking, filling each and every screw hole in the frames and battens with three white ash toothpicks and Gorilla Glue. It is a tedious, gooey task, but is the only right way to go. (Toothpick source: https://cibowares.com/products/plain-round-toothpicks)

Replacing the #8 with #10 screws is absolutely the wrong way to go. The holding power of that aged wood is compromised, and, since the #10’s have larger heads than the #8’s, larger countersinks must be driven, which, in turn requires inserting larger bungs, if you can find them. Go the lazy way and you “earn” weak fastening and wood bungs that are noticeably larger than all the others on your boat. UGHHHHH!